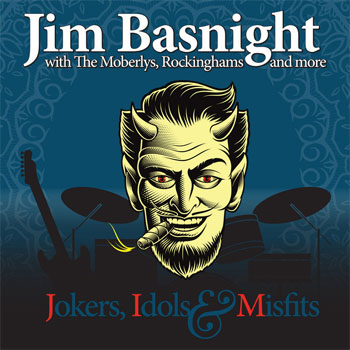 What an interesting idea for an album. Yes, a collection of covers presented by an artist who writes his own music isn’t at all without precedent. But on Jokers, Idols & Misfits, Jim Basnight pays tribute to the wide range of artists whose work has inspired and informed his own. Twenty-one tunes – one each – by the Beatles, Stones, Kinks, New York Dolls and others is what makes up this set. But where Basnight – -who sings and plays guitar – -changes things p is in his approach to the music. He works with an assortment of lineups including his own band, the Moberlys and the Rockinghams. The three bands each have their own musical personalities, and Basnight has matched them to the music.

Some of the tunes rock really hard: “Rock and Roll Cowboy,” the Sonics’ “Cinderella” and the obscurity (Mike Cejak’s “Midnight Mission Hit Parade”) have plenty of sweat ‘n’ swagger. Covers of baroque pop tunes by Stories and Turtles have a gentle touch. “Brother Louie” takes the song in a different direction than its original counterpart. The Who’s “I Can See for Miles” is played pretty straight – -and thus offers nothing new – but it’s so good that you won’t mind.

The best cuts here are a reading of the Dolls’ “Lonely Planet Boy” and a knowing cover of Paul Revere & the Raiders gem, “Good Thing.” The Jim Basnight Band nails the faux-Beach Boys/Terry Melcher vocal choruses, and the tune rocks. Basnight does his best Mark Lindsay; is that a little ponytail we see back there?