And the remaining songs were written expressly to fit right alongside those Boyd-penned tunes. One of the players assembled for The Real Deal’s sessions, blues harpist Rick Estrin wrote “I Am the Real Deal,” the album’s opening track. “Rick Astrin also wrote ‘Dona Mae’ for me,” he says.

For What My Eyes Have Seen, Boyd digs even deeper into the autobiographical style. The album’s narrative is linked together by a series of interludes: four short “My Memory Takes Me There” tracks and a longer piece that ends the album. Against a spare, gospel-inflected backing featuring only Andersen’s organ and guitar licks, Boyd sing-speaks bits of narrative.

The rest of What My Eyes Have Seen is characterized by a more conventional uptown blues style, with an array of players – some, like Little Village Foundation’s Pugh and drummer June Core returning from Boyd’s first album sessions – and led by Andersen. The players all shine and play together seamlessly, but Andersen’s arrangement style is careful to keep the brightest spotlight on Boyd and his effortlessly powerful vocals. When he growls, whoops and shouts between phrases on tracks like “In My Blood,” it’s clear that Boyd is having a good time in the studio. 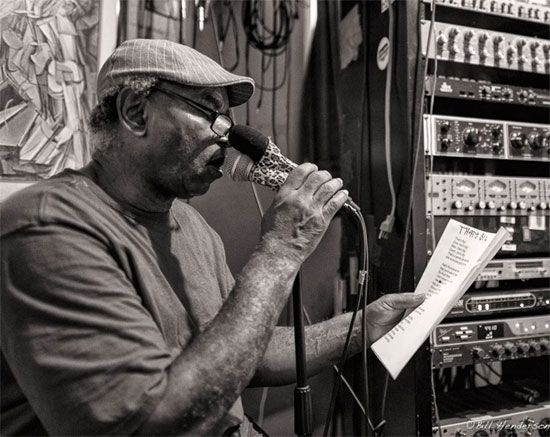 The sessions were fun and easygoing. “I just write these songs, and Kid calls some of the best musicians that he and I knew, and we bring them in and put them together,” Boyd says. “I sing the songs and we would get that music together, some kind of rhythm to match it. I [might] start to say something like, ‘Doo-dah doo doo, doo-dah doo doo bah bum’ or whatever, to say that’s the way the rhythm to go with it.” In those cases, Andersen would often respond positively or make a suggestion as to how they might change it. “So then we just go like that, and finally we get it going,” Boyd says. “And next thing you know, I sung the song, and it’s done.”

Sometimes Boyd cut songs in the studio with a full band. In other instances he worked in a smaller setup. “There was a few times that just me, Kid on guitar and a harmonica player would just do it,” he recalls. “And then Kid would bring in the other guys later; [they would] listen to the way I’m singing and make up the instrumental piece. They added on the horns and other stuff sometimes after I had already wrote the song and recorded it.”

Boyd says that Andersen and songwriter Guy Hale suggested the album’s central concept. “They said it’s kinda like a biography of my life, [so] I just told them stories,” he explains. “There were just so many things I had to tell about what I was doing up back there in Greenwood, Mississippi. So I told it straight. I was around during a lot of those lynchings [of people] like Emmett Till.”

Some of his tunes on What My Eyes Have Seen are indeed about his youth in Greenwood, like “I Heard the Blues” and “Run Me Out of Town.” Others tell the stories of his move out west (“California”), the day job he held for decades (“The Singing Roofer,” the album’s jump blues highlight) and his relationship with Dona Mae (“49 Years.”)

And Boyd doesn’t seem in danger of running out of material. “Shit, I got so many titles,” he says with a hearty laugh. “I got so many that’s already written you haven’t even heard yet!” Sometimes he reaches back again to his days in Greenwood, a deep source of inspiration. “Silas Green, my step-grandfather, he would say things like, ‘Boy, you barking up the wrong tree’ or something like that,” Boyd says. “So I wrote a song [about that]. I write about stuff he’d say to me when I was young. You wait until you hear them; I got more, like one called ‘Body, Mind and Soul’ and another called ‘The Love Jones.”

As we talk about his career in music, Boyd emphasizes that he’s better known in Europe than in the United States. Asked about the idea that historically, African American musicians have often found more acceptance in Europe than at home, he has plenty to say. “It’s always been like that,” he says. “When they did start recording blacks – what few they recorded to start with – they tried to bring it to the white people.” Boyd characterizes the reaction: “They were told they needed to get back across the tracks with that shit! They weren’t even ready for us.”

He’s not sure that things are very different today. “Now [people] claim that they had been loving the blues all the time, but they wouldn’t even accept us when we tried to bring it,” Boyd says. “They didn’t understand too good. Just like when they didn’t understand when Jesus Christ tried to talk to them: they killed him instead. Now, if they kill someone as important as that man was, what the hell do you think they care about me or you?”

Guy Hale’s liner note essay for What My Eyes Have Seen seeks in part to place Boyd’s life story in a contemporary context as a lesson. “This record is not just John Blues Boyd’s story,” he writes, “but … also gives warning of what happens when racism and inequality is allowed to have a voice in society. […] In John’s songs and memories is a warning that we should all heed about what can happen when we allow evil to prosper.”

Hale’s essay observes that modern politics “are indeed divided and dark.” And while Boyd doesn’t weigh in with specifics, he agrees that there’s an undeniable connection between his life experiences and the United States of today. “I have been through so much, and I am looking at it going on again,” he says. I am 75 years old now, and I am looking at all that stuff that I used to watch when I was a kid.”

Boyd comes from a big extended family, and it’s likely that he’ll draw upon some of those familial connections for inspiration when writing even more songs. “My dad come from eight,” he says. “Five boys and three girls.” And Boyd estimates that he has about 300 relatives in and around Meridian, Mississippi, 150 miles Southeast of Greenwood.

An entire album of songs about baseball seems a future possibility as well. Boyd’s family used to own a Negro League baseball field, he says. “Willie Mays used to play in our ballpark. Satchel Paige taught my uncle Willie how to play baseball. And I am Oil Can Boyd’s first cousin,” he announces with pride. “He used to pitch for the Boston Red Sox.”

With the pandemic putting a temporary stop to live performances, John “Blues” Boyd finds himself with even more time to write new songs. “I’ve been doing nothing but just being at the house,” he says, noting that he has written as many as eight songs in a single day. “I’ve written one about – well, I’ve got so many of them I forgot the title to many of them – but it was done by me.”