“She had grown up in Pompano Beach, but she left there, gone to New York City and married,” Boyd recalls. Dona Mae was up North some 15 years before leaving her husband, returning to Florida and moving back in with her mother. “When I came to Florida, I was young,” Boyd says. “I turned 19 in 1964, shortly after Muhammad Ali beat up Sonny Liston.”

When they first met, “Dona Mae was waiting tables at a place called Club Clover,” Boyd recalls. Florence Ali’s Club Clover was a very popular hangout, and one of few minority-owned (much less female-owned) establishments in the area.

Boyd and Dona Mae moved in together almost immediately. “We were living in an apartment; hadn’t been too long built,” he recalls. “Much nicer than anywhere I had ever lived. The house I grew up in wasn’t bad but, it was a wooden slave house. This was cement and plaster and all; it was a nice place.” Boyd and Dona Mae shared the apartment with Junior and another of Boyd’s friends, Johnny Earl Hall. “We paid the rent together,” he says. “We worked for $7 a day picking tomatoes, which was better than working in that bean field!” 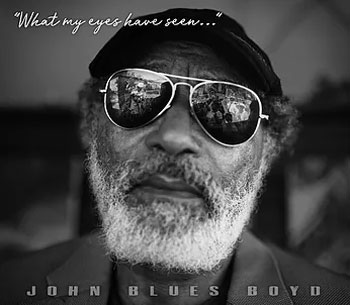 Meanwhile, Dona Mae had left some loose ends back up north. “She still had to get a divorce from her husband,” Boyd says. “Lots of crazy stuff happened. He said he was coming down to Fort Lauderdale to put a bullet up my ass!” On that phone call, Boyd had a ready reply for Dona Mae’s estranged husband. “Okay, you come down here, but you must remember one thing,” he told the man. “When you get here, you can’t be going back to no New York. Because if you come here fucking with me, I’ll kill you!”

Dona Mae’s husband was suitably intimidated, and he never did show up in Florida. Boyd laughs heartily as he recalls his final phone conversation with the man. “The last thing he said was, ‘I will tell you what: you’ll never marry her, ‘cause I am not going to divorce her.”’ I said, ‘Well just think of me fucking your wife every night!’ He never did come down from New York and put that bullet in my ass. I wasn’t worried about that.”

By 1978, John and Dona Mae decided to leave Florida. “I took her to Greenwood to introduce her to my mom and everybody else,” Boyd says. “Then we went to Chicago and stayed with one of my sisters for about six weeks, and then we went on to California.” The couple settled there for good. Boyd had already joined the roofers union when still in Florida, and he found that in San Francisco, the wages were quite a bit better. “They were making three times the money I was making in Fort Lauderdale,” he says. “That was the best Dona and I had started doing.”

Boyd would stay in the hot tar roofing trade for nearly forty years. And – following in the tradition of laborers of previous generations – he sang while he worked. “When I was doing roofing all of those 40 years up there on the roof, they’d say, ‘John, bring out one of them blues for us,’” he recalls with pride. “And I said, ‘Okay, when start to feel like, it I will … later.” But his coworkers rarely had to wait long. “I’m swinging a hard tomahawk all day, and singing,” he says.

“Way back about 2003, I got my [roofing] contractor’s license right here in Redwood City,” Boyd says. But he had to give up the business. “I retired because Dona Mae got sick,” he says. “After 39 years of us being together, I had to take care of her for the next ten.” Dona Mae’s kidneys failed, and she refused dialysis treatment. “I had to push her in a wheelchair and everything else,” Boyd says. “She died in 2014 at 9:25 p.m. on a Friday night. We had her funeral a couple of weeks later.”

It had only been after retiring that John Boyd got serious about rekindling his long-dormant interest in music. “The first time I put a band together and started to sing somewhere was at the British Bankers Club,” he recalls. That was April 5, 2009.” And even though Dona Mae was already quite ill, she was very supportive of John’s musical aspirations. “She just loved me, and we loved each other,” Boyd says. “She supported me in every way she could. Every time she heard that someone was looking for a blues scene or whatever, she told me. And then I went and talked to the people, and they hired me.”

Boyd landed a regular gig at the British Bankers Club in Menlo Park, a short drive from his home in Redwood City. “[Club owner] Lance White hired me, and I stayed there for two years and seven months before he lost his license” in 2012, Boyd says. In addition to original songs, his repertoire included songs from Wynonie Harris and Big Joe Turner; both of those singers influence Boyd’s own vocal style and delivery. During our lively interview, the conversation is peppered with impromptu Boyd vocal interludes, snatches of songs like Harris’ 1949 side “Drinkin’ By Myself” and Turner’s “Flip, Flop and Fly” from 1955.

As he performed more and more around the Bay Area, Boyd inevitably connected with guitarist and producer Christoffer “Kid” Andersen. “Kid introduced me to a lot of people that he knew, and Jim Pugh happened to be one of them,” he says. “We’re all friends now.” About a year after Dona Mae’s passing, Boyd felt ready to put all his energies into music. “So I went with Kid to Norway; we worked and made some money,” On that trip, Boyd says he also “saw a little bit of England and Germany. And that’s when I started to become known.”

Boyd says that the band for some European dates included acclaimed bassist Jerry Jenmmott (profiled in Living Blues’ November/December 2019 issue) and longtime B.B. King drummer Tony Coleman. “You might as well say I brought that house down,” Boyd says. “We were singing for 8-10,000 of them.”

Seemingly making up for lost time, today Boyd says that he’s written many more songs than what can be heard on his 2016 debut The Real Deal and his latest, What My Eyes Have Seen, both produced by Andersen at his Greaseland Studios in San Jose, California. “I had already written about 135 of them that are in Kid’s computer,” Boyd says. “I’ve got a lot of them; I have written 17 more songs in my book that I have in front of me right now.”

On his The Real Deal debut, ten of the album’s 13 songs are Boyd originals. Following the adage “write about what you know,” Boyd’s songwriting approach leans heavily in a self-referencing direction. Songs like “The Smoking Pig” tell the story of a place where Boyd worked, and many love songs – like “When Your Eyes Met Mine” and “That Certain Day” focus on Dona Mae, the love of his life.