One of the more intriguing blues releases of late is What My Eyes Have Seen by 75-year old singer and songwriter John “Blues” Boyd. But despite his years, Mississippi-born Boyd has only been a professional musician for just over a decade. Yet in that short period, he’s been making up for time.

Johnny James Boyd Jr. was born in the cradle of the blues, in Greenwood, Mississippi. “I lived on Pearl Street, just on the other side of the railroad track in a section called Baptist Town,” he recalls. But the neighborhood of his birth is long gone. “They made those people tear those houses down,” he says.

John “Blues” Boyd was immersed in the blues from a very young age. “I have been listening to the blues since I was three and a half or four,” he says. “My daddy played the blues on the phonograph a lot.” Boyd’s father was a serious fan of a musician born the same year as him: B.B. King. “He also loved Little Junior Parker,” Boyd says. “I think he’s the best blues singer I ever heard.” 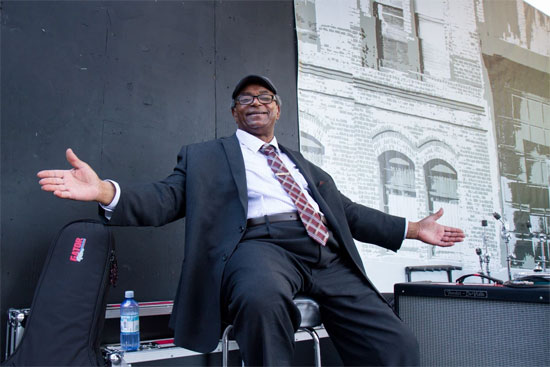 Unlike some blues musicians, Boyd doesn’t cite the church as an influence on his music. “The blues ain’t got nothing to do with the church,” he insists. “A lot of people say that, but they’re incorrect and uninformed.” That steady diet of blues and r&b on the elder Boyd’s record player – plus the sounds of local musicians – provided all the musical inspiration he would need. And his life experiences would provide fodder for the words to his songs.

Blues was all around Boyd as a young boy in Greenwood. One of his kindergarten classmates was a nephew of Eddie “Guitar Slim” Jones. And – though somewhat removed – musical talent was in Boyd’s family. “I had a step-grandfather on my mother’s side,” he recalls. “The called him Silas Green. He used to sing and dance right there in Greenwood.”

And Boyd claims Eddie Boyd as a relative. A fellow Mississippi native, Eddie Boyd scored several hits, most notably the #1 R&B single “Five Long Years” in 1953. “He was supposed to be, from what I was told, first cousin to my dad,” says John Boyd. “I never did get a chance to see or meet Eddie; he was already gone to Europe because he had gone not too long after he wrote ‘Five Long Years.’”

John Boyd didn’t play an instrument, but he could sing. “I was just born with a voice to sing the blues,” he says. “When they first heard me, my mother and grandmother and all of them was in the house: ‘Come and listen to Johnny!’ I was back there singing along with Junior Parker [on the turntable]. I was about eight years old at the time.”

Influenced by the blues greats, Boyd started writing songs when he was just 12 years old. He sent some of them off to publishers but never heard anything back. “One time I mailed one, and the next time I heard that song, some guy was singing it on the radio,” he recalls. “I didn’t send it probably where I should have. I sent it to Nashville; I probably should’ve sent it to somewhere else.”

Boyd says that the song in question was called “Ole Dear One,” and he recites some of the lyrics. “Come and see me when the lights are low / I want to hear you knock on my door / Tell me pretty baby everything is all right / and love me, love me, love me with all of your might!”

Pressed for details, Boyd provides a bit more context. “Well, I didn’t exactly write that song,” he admits. “It was written by friends of mine that I had known all my life.” But he insists that he did write plenty. “Some of the songs I wrote, I didn’t think that they were all that good,” he says. “So I just ripped them up. But I was always writing songs.”

But life got in the way, and Boyd’s musical endeavors would be put on hold for the better part of a half century.

“I left Greenwood, Mississippi when I was 18 years old, about six days after they murdered JFK,” Boyd recalls. “I was in that freedom movement.” In the wake of President Kennedy’s assassination, he took part in a protest march. “We were walking down McLaurin Street, talking loud. The law was riding around with their lights turned off.” The police called out to Boyd, demanding that he and his friend – also named Johnny – come over to their patrol car. “My friend, he stutters when he talks: ‘Let’s, let’s go. We better go and see what they want.’”

But Boyd was having none of it. “I told him, ‘Let’s hit this alley right here by the railroad track.’ So I ran and went into that alley. I got away from them.” But Boyd’s friend went over to talk to the cops. “When I saw him later, he had tears in his eye,” Boyd recalls. “I was thinking that they might have whipped him in his rear or beat him around a little bit.”

He asked his friend what had happened. But Boyd’s friend didn’t go into details. “He told me, ‘Johnny, Johnny you shouldn’t have run!’ And I said, ‘Yes the hell I should have! You too! I told you to go!’” Concerned about what might happen to him if he stuck around, Boyd made the decision then and there to leave Greenwood. “But I didn’t have any other money to go North or go West to California like I wanted to do,” he says.

“There was a guy I had seen over in Greenwood a lot,” Boyd says. “Big white guy; his name was Junior. He had one of those old fashioned panel trucks.” Junior knew of some work opportunities in Florida. “Six days later – November 28th – I said goodbye to my grandmother and my mother and sisters and brothers, and took off and went to Florida to go work on the migrant bean farm,” he says. He landed near Homestead, in the extreme Southern end of the state. “We went to B&L [Farms] quarters, and I stayed on there until sometime after Christmas,” Boyd says. But he quickly realized he didn’t like the work. “So then I went to Pompano Beach.”

It was there where he’d meet Dona Mae. She would figure prominently in both his life and his musical journey.