This story appeared previously in Bold Life Magazine, and focuses on an event that took place almost exactly a year ago today. Let’s hope events like this are once again in our future … and soon. – bk

Imagine an event that’s equal parts shopping mall, museum and Antiques Roadshow. That begins to describe the Carolina Guitar Show, a now twice-annual event at the WNC Agricultural Center . Dealers and attendees come from around the world to buy, sell, trade – and sometimes just marvel at – a wide assortment of stringed musical instruments and accessories.

“Even though we call it a guitar show, it encompasses a lot more,” says Gary Burnette of Bee-3 Vintage Guitar Shows; he and wife Bonnie have been hosting the expo since 2017. They’ve also been putting on similar shows in Philadelphia since 1990. “We’re talking about guitars, of course,” he says. “But you’ve also got amplifiers, effects, drums, even horns.” He says that major instrument manufacturers like Martin and Taylor display at the show, but sometimes they’re there “for nothing more than to showcase their products.”

There’s quite a bit of used and vintage musical gear on display and for sale as well, Burnette says. “You get a little bit of everything.” And custom luthiers from Western North Carolina and beyond show off their fine handcrafted instruments. With a few hundred vendors on hand, it all makes for an impressive display. “Think about this,” Burnette says. “We’ll have a few thousand people walking into the show, checking all the instruments out, putting their hands on them, smelling and feeling them and listening to the sounds. Where else are they going to get that?” 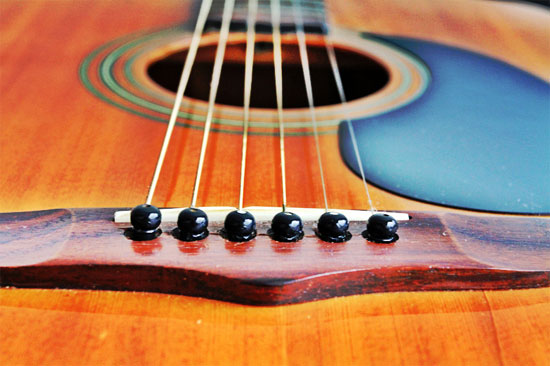 Burnette emphasizes that the show will feature both acoustic and electric instruments, making it somewhat unique in the world of musical instrument expos. “Largely, guitar shows are directed more toward electric than acoustic guitars,” says Western N.C. musician, collector and musical historian George Gibson. “You’ll find more acoustic instruments at Bee-3’s show, along with a lot of people who are quite knowledgeable about the instruments.”

Vintage instruments make up a significant part of what will be on display at the Carolina Guitar Show, Burnette promises. And Gibson – whose personal collection of instruments numbers between 150 and 200 – is well acquainted with the allure of those older guitars. “Vintage guitars have appeal, in part, because of the people who played them, and also because of their sound,” he says. “Some of them sound incredible.”

Gibson notes that there’s been a resurgence of late with regard to demand for vintage instruments. For quite a while, he says, “it was hard to find new instruments that were really good, so people started looking for older guitars.” Even today when both mass-produced and hand-crafted instruments are available in high quality, interest in classic guitars is stronger than ever.

Another trend that Burnette has noticed lately is an increased interest in the ukulele, the tiny four-stringed instrument first designed in 19th century Hawaii. “Go figure,” he says with a laugh. “I can’t play one.”

Burnette says that it’s quite common for attendees to bring along a guitar they’ve been keeping at home, and then successfully finding a buyer among the exhibitors. “A granny might walk in with a pre-war Martin D-45 [acoustic] or a 1960 Les Paul Standard [electric]guitar,” he says, speaking from experience. “And boy, will that get some attention! She may go in with the expectation of getting ten to fifteen thousand dollars, only to find out it’s worth two to three hundred thousand!”

He makes the point that buyers are ready to pay cash to attendees bringing in quality instruments. “We have overseas folks coming in, and a lot of buyers out of Chicago,” he says. Guitar Center sends their buyer from California, looking for vintage stuff.”

He offers some advice to those who are considering selling that old guitar gathering dust in a closet. “If you’re carrying a pretty good instrument, you’ll get a lot of interest,” he says. Don’t automatically sell to the first person who offers to buy. “Sometimes it pays to do a little shopping around through the show first,” he advises, “to kind of get a feel for what you’ve got.”

Gary Burnette says that the annual event in Fletcher has been so popular that they’ve added a second one, to take place in the Fall. “The Carolina Guitar Show brings musical enthusiasts and musicians together as a community to enjoy the camaraderie,” he says. “And there’s always that hunt for that special guitar.”