The Moon and You: Curious About What Happens Next 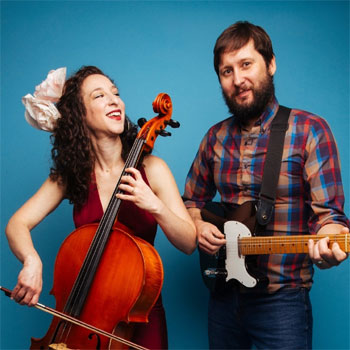 Ryan Furstenburg and Melissa Hyman each had things going as singer-songwriters before they met in 2011. But once they combined their creativity, the result was something special. “Our first date was playing music together,” Ryan recalls. “Melissa offered me money.”

“I could tell he was really broke,” Melissa adds. Clearly the pair – now husband and wife – enjoy a good bit of good-natured verbal sparring. It’s a key to their effectiveness as a musical duo. “I guess I must have had a little crush on you, Fursty,” she says. “It was mutual,” Ryan replies.

At the time, Hyman was playing a series of gigs at senior homes across North Carolina. “So I asked Ryan, ‘If I book these senior homes in Winston-Salem, do you want to come play them with me?’” she recalls. “Because then I knew he would have to come over my house and practice. And that meant that I could cook for him.”

It worked, and they clicked instantly. But they both still had their own musical projects; for his part, Furstenburg was playing rock ‘n’ roll in Uncle Mountain with future River Whyless musician Daniel Shearin. Hyman played in Ten Cent Poetry with Chelsea La Bate. “We didn’t see each other very often because we were both on tour a lot,” Furstenburg says. They became a couple, but not yet a musical outfit.

Then, what might have looked like two unfortunate, unrelated events added up to an opportunity. “Both of our bands broke up within a month of each other,” Melissa recalls. “And we were like, ‘We need to become a band now, because we don’t want to do anything else!’” Such was the start of The Moon and You. Their honeymoon would be a concert tour of Europe.

Even though the pair came from somewhat different musical backgrounds, their combined sound and style was determined by what each brought to the project. “I think we were just honed in by our instruments,” admits Furstenburg, who sings and plays guitar and banjo. “Just an acoustic duo. I don’t think there was a lot of thought process that went into it.”

Melissa Hyman is a classically-trained cellist. “But she was already a folkie,” Ryan insists. And Melissa agrees. “I grew up on a lot of sing-alongs at my house,” she says. “But my cello life and my singing life were separate for a long time.”

Those pursuits combine gracefully in the context of The Moon and You. Melissa and Ryan released their debut record, The Ocean’s Lonely Daughter, in 2013. A live album and three more studio releases would follow; 2019’s Big Mystery is the duo’s latest release. That record is a kid-focused record of lullabies, and the project gave the couple the opportunity to rope in a who’s-who of local friends and musical notables.

But at its core, The Moon and You remains very much the creative expression of Ryan and Melissa, and the lyrical themes they explore via crystalline instrumentation and sweet harmonies communicate the love they share.

It all happens very naturally and organically. And even though The Moon and You’s albums are finely crafted, polished affairs, the couple’s easygoing nature is reflected in the informal approach they take to making those records. “I wouldn’t say that we plan too much, would you?” asks Ryan, giving his partner the final word.

“That’ll be an ongoing theme,” Melissa says with a chuckle. “So far, our approach has been to assemble a recording setup – one that often involves borrowing pieces from friends – and then assembling a band that involves borrowing friends. And then … we throw it all together at home in a way that costs as little as possible!”

After the laughing subsides, Hyman provides an answer that sums up what The Moon and You is really about. She concedes that – strictly speaking – music isn’t something that’s absolutely necessary in life. But she says that at its best in a live setting, “you’re doing something that hopefully makes everyone in the room feel connected, inspired and curious about what happens next.”