Matt and Adena McDaniel lead an unconventional musical outfit, the six-member Spartanburg Philharmonic Percussion Ensemble. The group began in 2016 as an offshoot of the SPO. Along with Patrick Lowery, the McDaniels were already playing with the Philharmonic. For their premiere performance – a sold-out show as part of the Friday night Espresso Concert Series in early 2017 – they were joined by Kevin Mavis. Today the group includes Kevin Maloney and Veronica Weygandt as well. The Ensemble uses an impressive array of percussion instruments – bongos, Chinese opera gongs, cajons and more – to perform intriguing musical works. 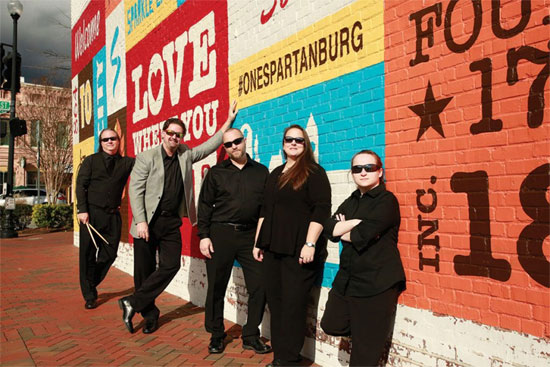 What styles of music does the Ensemble play?
Adena: All of the music for this concert is music originally composed for percussion ensemble. Two of them are xylophone ragtime pieces written in the 1920s by George Hamilton Green.
Matt: We are playing an avant garde/minimalist piece by Steve Snowden, plus another piece that falls into that category. I don’t want to give away the surprise to anyone who attends the concert, but I know they will love it!

How do the contemporary pieces you perform differ from older works?
Adena: To me, one of the most noticeable differences is the variety of instruments called for in newer pieces. Composers are continuing looking to add new sounds to the repertoire and use traditional instruments in different ways.

Does your repertoire lean more toward complex works and atonality?
Adena: For this kind of concert – a short Friday evening concert – we chose music that is accessible to everyone. While some of the tunes are toe tappers, there are elements of the music familiar enough in each piece for all to enjoy. I think [the audience] will be surprised how you can find a melody even in a piece played only on non-pitched drums.
Matt: Composers are writing for our ensemble as they would have a string quartet or brass ensemble a hundred years ago. For this concert, I have tried to highlight living composers including Emmanuel Sejourne, Julie Davila, Nebojša Živković and Ivan Trevino.

How did you end up playing percussion?
Adena: I had a background in piano. In high school, my band director steered me towards percussion due to the similarities between keyboard instruments and piano.
Matt: When I was in fourth grade and it was time to sign up for band class, the director passed out a sign up form with two questions: name and instrument. I thought about this for a few days, and after much consideration, I filled out the form: “Matt McDaniel, triangle.” I’m sure that the director got a good laugh from my response!

What kind of feedback have you received from audiences?
Adena: It has been overwhelmingly positive. Most patrons who are not regulars are surprised how melodic our concerts are, and that we don’t just “hit things the whole time.”
Matt: Those who aren’t familiar with us are always surprised to hear how varied our music is, that it’s not “just drums.” Since our last concert, I have had dozens of people stop me in public to comment on how much they enjoyed our concert.

Percussion-based music is about more than just what the audience hears, isn’t it?
Matt: Yes! Composers are writing for percussion ensemble with the audio and visual in mind; audiences are inherently engaged visually by the nature of our performances. Actually, one of the works we will perform for this concert was probably written with the visual aspect of percussion first, and the “music” next.

What’s one of your favorite things about playing in the Spartanburg Philharmonic Percussion Ensemble?
Adena: The Ensemble gives us an outlet to perform music that we enjoy and don’t often get to perform with other groups.
Matt: With the nature of percussion and its variety of timbres, the soundscapes from piece to piece are always exciting to hear for audiences.