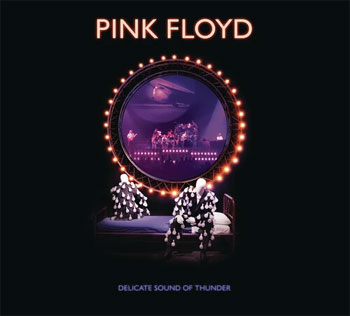 Twenty-two years after its initial release, it’s worth considering just how remarkable an album Pink Floyd’s Delicate Sound of Thunder was in 1988. Though Pink Floyd had released 13 albums, their catalog consisted almost completely of studio material. Only half of 1969’s double-LP Ummagumma showcased the band live in concert. So for fans who wanted a live document of Pink Floyd – and who weren’t interested in fan-traded bootleg recordings – Delicate Sound of Thunder represented something special.

And in 1988, the band had amassed a generation of fans who would have been too young to see Pink Floyd on the band’s 1975 tour; those concerts would be the last time the group would perform the entirety of its landmark album The Dark Side of the Moon onstage for more than a dozen years. But when Pink Floyd reformed without founding bassist (and primary songwriter) Roger Waters in 1987, the complete Dark Side would serve as a centerpiece their world tours. Drawn from recordings of a five-night run at Nassau Coliseum on Long Island, New Your, Delicate Sound of Thunder captures much of that performance and more.

But that’s not the only quality that made DSOT an important item in Pink Floyd’s body of work. When guitarist David Gilmour revived the group with founding drummer Nick Mason (plus original keyboardist Richard Wright), the “new” Pink Floyd made and released a studio album, A Momentary Lapse of Reason. Though it contained popular, well-crafted songs like “Learning to Fly,” “One Slip,” “On the Turning Away” and “Sorrow,” AMLOR sported production flourishes that wouldn’t wear especially well over time: rather than having the sound of the band’s prime era – The Dark Side of The Moon through 1979’s The Wall – it sounds very much a product of the ‘80s.

And that’s in large part due to the presence on that album of at least two other drummers and four additional keyboardists; the distinctive participation of Mason and Wright was limited. (A 2019 remix of the studio album included in The Later Years boxed set remedied AMLOR’s dated qualities.)

Yet while Pink Floyd’s live lineup on its 1987-88 tours included auxiliary musicians, most of what the audiences heard at concerts – and on Delicate Sound of Thunder – was played by the musicians they had come to know and love. That, too made the live album worth owning. And unlike many live albums notorious for their “sweetening,” DSOT featured only minimal post-production fixes.

But now there’s reason to buy it again. The new 2020 versions of the album feature eight songs left off the original releases due to the limitations of the respective formats. The remixed, remastered album sounds better than before, too. The 3LP vinyl configuration is especially nice, with a slipcase, large-format booklet and download card.

In the years since Delicate Sound of Thunder’s first release, fans have been given access to many other live Pink Floyd recordings (P.U.L.S.E., much of The Early Years 1965-1972 and more) but the expanded, improved and lavishly packaged reissue will remind fans of what made it special more than two decades ago.