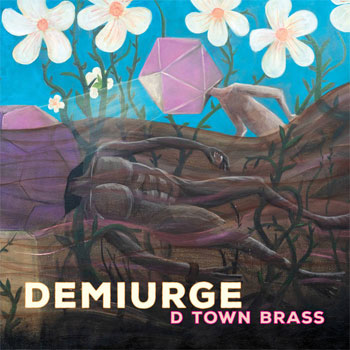 Much of what passes for avant garde music tends toward a kind of seriousness, a dour approach that screams, “this is art!” and all but insists that the listeners revel in its importance. Accessibility rarely figures into the mix, and that’s the point, kind of. But there are exceptions. The work of Sun Ra certainly qualifies as an exception: it’s way out-there for sure, but there’s a playfulness, a giddy sense of fun, that characterizes much of the music.

Sun Ra has long since left us, but his spirit does live on. One exponent of his mindset is a North Carolina (and/or New York City)-based big band called D Town Brass. They describe their music as “pre-post-apocalyptic funk,” among other epithets. It’s weird, for sure. But it’s fun stuff. On “Corporate Life Form,” Honking, squawking horns compete fr supremacy against a rhythmic bed that sounds not unlike Yes’ “Changes,” of all things.” Spoken word sections suggest everything from Discipline-era King Crimson (specifically “Elephant Talk”) to Squirrel Nut Zippers to the Tubes’ “Wild Women of Wongo.”

There’s a pleasingly anti-establishment, anti-status quo perspective that underpins these tunes. It’s crazy stuff, grabbing the big band sound and dragging it – willingly or not – into the 21st century. The songs rock, and in many ways D-Town Brass seems to share an aesthetic with Fred Pallem’s Le Sacre du Tympan as well as Norway’s Jagga Jazzist. But really, those touchstones or musical guideposts can only tell the reader so much about D-Town Brass.

The music truly has to be heard; sometimes it gets weird, as with the cacophonous “Cheap Dimensions.” “Late Melody” is atmospheric and alluring. “Human Resources” will appeal to fans of the Ali Shaheed Muhammad and Adrian Younge outfit The Midnight Hour. “Good Cop” has the feel of classic ‘60s era crime and spy jazz. And “Demon” — the album’s best track — feels like ‘70s cinematic funk, albeit with more politically charged spoken word bits.

There are elements of kitsch at work on cuts like “Cobbler’s Dream.” That tune might suggest Frank Zappa to some ears; others won’t know quite what to make of it all, but they’ll be intrigued nonetheless. Happily for those who open themselves to the ensemble’s unique music, there lies within it a wealth of material; the group has been releasing music since 2013, and there’s much more to discover. But Demiurge is a fine place from which to begin that journey.