“We’re doing 25 shows specifically targeted to 25 markets,” Rundgren says. “And everything that we do will be in the pursuit of preserving the experience both for the audience and for the band.” The focus is squarely on making each show a unique event, in a manner as close as possible to the “real” thing. That means making use of geofencing technology, creation of a “virtual perimeter” that can restrict “attendance” at a particular show to audience members who live there. (Since the initial tour announcement – “due to overwhelming demand,” says Rundgren’s tour publicist – the geofencing restriction has been relaxed.)

And the character of each show is being constructed to reinforce that home-town feel as well. It appears that most every detail has been given serious thought. “From the time that the audience sees the stage – just like if you went to the venue and they open the doors a half an hour before the show – there’ll be the sound of murmuring people looking for their seats and stuff like that,” he says. “For every city that we’re in, I’ve made some effort, where such exists, to get a picture of the actual proscenium stage that we might’ve played in that city, and that’ll be on the video wall that’s behind us.” 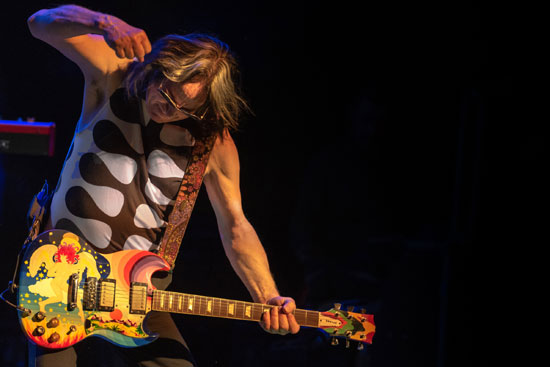 Real-time video images of ticketholders who’ve purchased a special package will be displayed on video screens in the front three rows of the venue “so that we can see them, recognize them and interact with them,” Rundgren says. “And for every show, we localize it to the town that we’re playing. We dress the entire backstage with posters and local sports memorabilia.” They go so far as to set the stage clocks to the local time of the audience. “We’re in that time zone for as long as we’re in the building,” Rundgren says. And the food for the band and crew will be delivered from the target city. “And if we can’t get it delivered, at least we get the recipe” and that’s catered, Rundgren says.

“We’re fooling ourselves as much as we’re fooling the audience,” he says with a smile. “We’re self-hypnotizing that we’re in that town. From the time we get in the van until the time that we get back to the hotel, in our minds, we’re in Buffalo or Indianapolis or San Diego. Or wherever it is that we’re virtually playing.”

Thanks to the virtual nature of the “tour,” Rundgren could have staged the whole enterprise from the comfort of his home in Kauai, Hawaii. But from his perspective, Chicago makes a great deal more sense. “It had to be a major hub of some kind,” he says. “And we figured the central time zone is probably the best in terms of our making adjustments for local time zones.” That way, each of the geofenced shows can be scheduled to start at 8 p.m. in its local market, and the crew and musicians in Chicago won’t find themselves working weird hours.

“In other words,” Rundgren explains, “if we’re playing an 8 o’clock show on the east coast, we’re playing a 7 o’clock show in Chicago. Which is not so bad; you often find yourself doing that on a Sunday night if you’re on tour.” And a show for a west coast market would find the band taking the stage at 10 p.m. “That’s not awful, either,” says the 72-year-old musician, “because there are places where they push the shows off really late.” So a Chicago venue works as a good compromise.

But Rundgren’s virtual tour won’t broadcast (or narrowcast) from a concert hall. Instead, he’s chosen “a general purpose event space that’s very well tricked out. There’s an industrial kitchen in it, so we can do all of our own catering. We don’t have to crack the bubble.” For the duration of the tour, musicians and crew will be set up in a residence hotel, with shuttles taking them between the venue and their temporary home. An on-site COVID compliance professional will be on hand, and everyone will undergo regular testing.

Rundgren even has a backup plan in the event that one of the members of his 10-person band is taken ill. “We have backup musicians ready to step in, in case someone becomes so sick they can’t perform,” he says. And if a musician were to be asymptomatic but infectious, there’s a plan for that as well. “We’ll have a little sterile room for them to play in,” he says. “We’ll have a camera on them; maybe we’ll put up a video panel on the stage where they’re supposed to be so you can see them.”

He appreciates the fact that he’s embracing the unknown. Though he’s upbeat about the venture, he’s realistic, and has considered some of the more disturbing possibilities. “We might have somebody try and crash the bubble,” he says. “And we may have someone try and get in and make a statement or try to purposely infect people. Who knows? It’s a pretty wild and woolly world out there.” But he believes that his team is staffed with hard-working, conscientious people. “I think we’ve got enough experience in the various aspects of what we’re doing that we won’t be caught flat-footed,” he says.

Still, Rundgren knows that there’s risk inherent in an endeavor such as his “Clearly Human” tour. “The biggest peril,” he says with a chuckle, “is delivering something that, in the end, is manifestly unsatisfying so that nobody wants to do it again.” Considering the man’s innovative, creative track record, it doesn’t seem likely that will happen.