An edited version of this feature appeared previously in New City.

Rundgren has a long history with Chicago. “I remember one of the first times I played here,” he says, likely referring to a November 1973 gig with his band Utopia at the Arie Crown Theater. “I was walking towards the gig and a guy stopped me and said, ‘Hey, my name’s Jerry Michelson, and I’m promoting your show.’” Michelson had recently launched JAM Productions with partner Arny Granat; the team would go on to produce thousands of concerts in and around Chicago. “I remember that because it was the first time I’d ever met one of the promoters,” Rundgren says. “He was really young, and I was really young, and he was just so excited.” 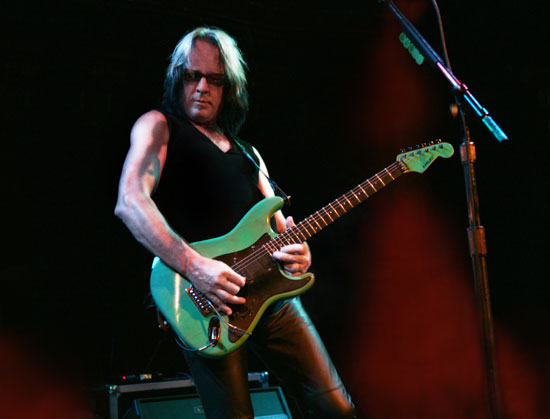 The show was a success for both performer and promoter. Rundgren would play more than 50 live dates in Chicago in the coming years, and that’s not even counting shows as a member of Ringo Starr’s All Starr Band.

Rundgren is a critically-revered artist who enjoys something of an outsider status, but his career has always been peppered with Top 40 hits. Those include “We Gotta Get You a Woman” in 1970, “I Saw the Light” and “Hello It’s Me” (both 1973), “Can We Still Be Friends” from 1978, “Set Me Free” with Utopia in 1980, the MTV hit “Time Heals” (1981), “Bang the Drum All Day” in 1983 and “The Want of a Nail” from his landmark 1989 Nearly Human LP. Even as styles and trends have changed and changed again, Rundgren’s status as an innovator and popular concert draw has never flagged.

Live shows have always been a part of Rundgren’s life; he has toured as a solo artist, with his various bands and as part of revival/reunion tours with both the seven-man progressive configuration of Utopia and its streamlined, new wave-leaning quartet lineup. As 2020 began, he had scheduled a tour dubbed “The Individualist, A True Star,” revisiting two classic albums from his extensive back catalog. That 15-city run would have included three nights in May at the Athenaeum Theatre. But the COVID-19 pandemic put an end to the tour before it began.

Yet Rundgren’s innovative inclinations meant that he remained determined to bring his music – live in concert, after a fashion – to his audience. And Chicago came to mind once again as Rundgren began developing the concept for his 2021 “Clearly Human” concert tour. With traditional live shows and touring unavailable as an option, he sought to develop an alternative to those things, one that would not only be practical and safe, but creatively fulfilling (for the musicians involved) and – most of all – entertaining for the audiences.

As it happens, Rundgren had already been thinking along these lines long before the pandemic began. Several years ago, he started scheduling shows only in major markets, flying from city to city and skipping the more grueling bus or van approach. But he quickly took note of the ways in which climate change was wreaking havoc with his travel schedule. “I found myself ever more often waiting for a delayed flight, wondering if I’m going to make it in time or suddenly having a flight canceled,” he says. “Mostly because the number of storms in the Atlantic had started to spike.”

He was (and remains) convinced that things wouldn’t improve. “If you had wanted to tour this past summer in California, the whole state was on fire,” he says, exaggerating to make a larger point. “And if you wanted to go to Texas, half of the state was underwater. The climate can’t be ignored. And it’s s a factor in terms of delivering the service that I deliver.”

Faced with that challenge, Rundgren asked himself a question. “What if you could book a tour where you essentially set up in one place, and then you sent the show [via video] out to a specific venue in a particular city, just like a regular tour?” The idea had distinct advantages: “Say you wanted to tour in the dead of winter,” he suggests. “You could still do a virtual tour.”

The idea met with some interest, but nothing took shape. Then COVID happened. “And that brought in that additional factor of the audience not being able to get to the venue,” Rundgren says with a rueful laugh. “So what do we do now?” Suddenly, his virtual tour concept started to make even more sense.

But then Todd Rundgren has long been known as the sort of artist who comes up with new, innovative ideas (and the infrastructure to implement them) well ahead of the pack. After years of tinkering with music videos behind the scenes, He opened Utopia Video Studio in 1979, more than a year before MTV launched. His Utopia Graphics Tablet System was proposed as a groundbreaking accessory for Apple computers in 1980. He worked with Time Warner Interactive Cable Network in the early ‘90s on a project that was a forerunner of on-demand music and video streaming. Also in the 1990s, Rundgren’s championing of interactivity manifested itself in his No World Order tour and his embrace of the CD-i music format. His Patronet artist-to-fan concept presaged Kickstarter, Patreon and a host of other 21st century interactive models.

Not all of those endeavors worked. In fact, one could argue than none of them was ultimately successful in the ways Rundgren might have envisioned. But as part of his larger body of work – and as part of the creativity-meets-technology landscape – his insistence upon always being on the cutting edge has paved the way for others to follow in his wake. By being less innovative, those artists charted a less risky path, took lessons from Rundgren’s occasional missteps and then capitalized on his ideas for their own gain.