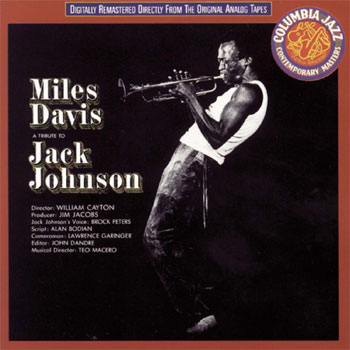 Side Two of Miles Davis’ Jack Johnson features the same players plus a different lineup, and in fact the aggregation wasn’t credited on the original LP. McLaughlin returns, joined by gonzo electric guitarist Sonny Sharrock. The bassist now is Dave Holland, and Jack DeJohnette plays drums. Bennie Maupin – whose improvisational work is central on Bitches Brew – excels on bass clarinet. And the keyboardist this time is Chick Corea. “Yesternow” is another cut-and-paste piece, joining together a 14-minute tape from Side One’s lineup with another track (later identified as “Willie Nelson,” a nod to another historic pugilist) to bring its runtime to nearly 24 minutes.

“Yesternow” is quite minimalist in places, with Davis’ horn at the center of things. There seems almost to be an unspoken challenge to the players: how little can you play and still be credited as being present? Happily, they’re up to that challenge. Thirteen-plus minutes in, Davis leads the ensemble through one of Jack Johnson’s most melodic, atmospheric sections. But that’s followed by a relatively smooth segue into the second lineup’s section, a much more psychedelic – if nearly as minimalist – piece of music.

The second half of “Yesternow” is a meditation of sorts; Holland’s repetitive, hypnotic bass line may not have been the most interesting thing for him to play, but it provides a foundation upon which everyone else can do their thing. In this case, McLaughlin’s thing is to spool out jagged bursts of squalling guitar. Davis turns in his most active performance; none of that one- note-and-walk-off stuff for which he’d sometimes be known.

Around the 19 minute mark, the band locks into a funky groove/lick redolent of Jimi Hendrix. Sharrock’s – or McLaughlin’s – guitar launches into outer space. And while there’s an undeniable improvisational character to the proceedings, it’s arguably more psychedelic than “jazzy.” And Davis seems inspired by what his sidemen are doing; he continues to engage of trumpet flights of fancy.

Jack Johnson did just-okay on the chart on its original release, and reviews of the day were mixed. But time has led to a critical reassessment of the album, and today it’s appreciated for what it is. In 2003 a sprawling six-hour boxed set, The Complete Jack Johnson Sessions presented five discs worth of material from the original sessions, arranged chronologically and without Macero’s editing (the fifth disc presents the original album in its 1971 version). 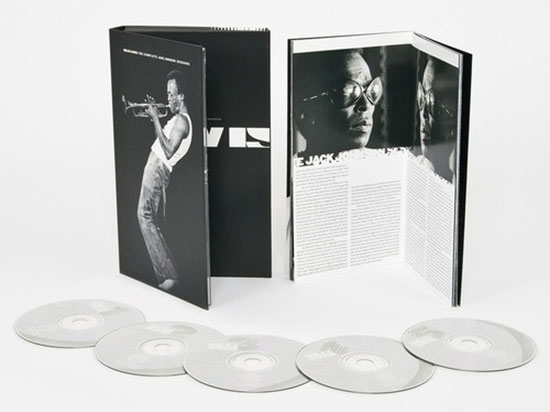 As fascinating (and ultimately essential) as the boxed set is, part of what it does is to spotlight the brilliance of the cut-and-paste method. The finished album in its 1971 form represents the most accessible presentation of the fruits of the musicians’ labors. Serious fans will want to hear it all, but they’ll likely return to that fifth disc again in the end.

While a pair of live albums from the period – 1970’s Miles Davis at Fillmore and Live-Evil from 1971 – continued to explore Davis’ interest in connecting jazz and rock, by 1972 he had moved on. That year’s On the Corner headed in a more explicitly funk direction, and was critically shellacked upon its release. (Though it too would undergo subsequent reappraisal, recognition of its place with what would come to be known as Miles’ “electric period.”)

There are, after all, many different Miles Davises. Each era of his music represents a radical stylistic departure from the one that came before it, and those who appreciate one period may well loathe another. But for those who approach his body of work from the perspective of a rock fan, Jack Johnson may well serve as a more user-friendly point of entrance than its more celebrated precursor, Bitches Brew.