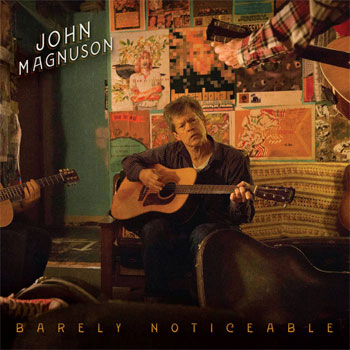 It doesn’t happen often, but when it does, I take notice: every now and then, one or another friend sends me an album with a Post-it affixed, sporting a message along the lines of, “You need to hear this.” It happened recently with the new album from John Magnuson. Living as I do in Western North Carolina, I wouldn’t have otherwise known about an album from Magnuson, formerly one-third of Minnesota alt-country group the Carpetbaggers. That group cut a pair of Twin/Tone releases in the early ‘90s, then gained a higher profile after opening for Son Volt; they released a well-received set on Shout! Factory in 1996.

Barely Noticeable is rooted in a similarly alt sensibility, but there’s a rock feel as well. Magnuson’s voice recalls early Elvis Costello, and his songwriting chops are impressive. The album’s 13 tunes are all originals, and they balance twang with rock-steady melodic values. Magnuson’s musical approach draw from classic country to be sure, but it’s not heard to spot a musical kinship with eclectic artists like John Hiatt and Nick Lowe in his songs. His uncluttered arrangements keep the focus on his vocals and lyrics.

And Magnuson’s influences extend in some unexpected directions. He may or may not have meant to do so, but the underpinning riffs and vocal harmonies of “A Bird That Doesn’t Sing” subtly recall the Beatles’ “And Your Bird Can Sing,” though its overall texture leans closer to Rubber Soul’s more acoustic-leaning tunes like “I’ve Just Seen a Face.” Time spent with Barely Noticeable is sure to be rewarding.