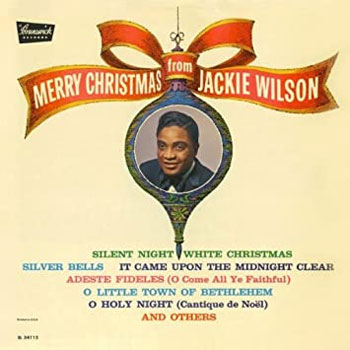 If you sent or received anything via the US Postal Service in the final months of 2020, you likely know that due to some serious shenanigans on the part of the DC regime that eventually rioted and then left town with its tail between its legs, mail was delayed. Sometimes extraordinarily so. I mention this only as explanation for why I’m reviewing a Holiday album in February: despite the best efforts of the publicist and label, it only got to me after Christmas was behind us.

Originally released in 1963, Merry Christmas from Jackie Wilson is neither a soul nor rhythm and blues album. No, while Wilson’s expressive, supple (four-octave) voice had and would continue to be applied to classic material in a manner that earned him the sobriquet “Mr Excitement,” this LP is a different kettle of fish.

Filled with a dozen traditional and religiously-themed Christmas songs, Merry Christmas from Jackie Wilson is a straightforward set. Chorus and orchestra are present, and tend a bit toward the syrupy (if tasteful) side. That, of course, works well on material like “The First Noel” and “O Little Town of Bethlehem.” And even the pop material – Irvin Berlin’s “White Christmas,” “Deck the Hall” etc. – is given similar treatment.

It’s nice stuff, to be sure, occupying a space halfway between what the Mormon Tabernacle Choir might have done (I don’t plan on verifying that claim, thanks) and something that a singer such as, say, Johnny Mathis might’ve turned in. I don’t know a thing at all about Jackie Wilson’s personal life, but if his mother was still with us in 1963, I suspect she would have been very proud to hear her son sing these songs. Owing to its seasonal character, Merry Christmas from Jackie Wilson is the sort of record you’re likely to pull from the shelf and drop on the platter but once a year. But when you do, it will help set the mood for the holiday.

The Org Music reissue is a perfect reproduction of the Brunswick original, save for a tasteful and tiny Org logo.