Vince Herman and Drew Emmitt Play the Music of the People

This interview was first published in December 2019 in Bold Life Magazine.

Since forming in the late 1980s, Leftover Salmon had earned a place as a darling of the jam band and music festival scenes. Though nominally a bluegrass band, the Boulder, Colorado-based sextet makes music that draws from a wide variety of American musical genres. Two of its founding members – Drew Emmitt (guitar, mandolin, fiddle) and Vince Herman (guitar) – maintain a creatively fulfilling side project, performing as a duo. Ahead of their late 2019 tour, Herman took the opportunity to reflect on their approach to making music. 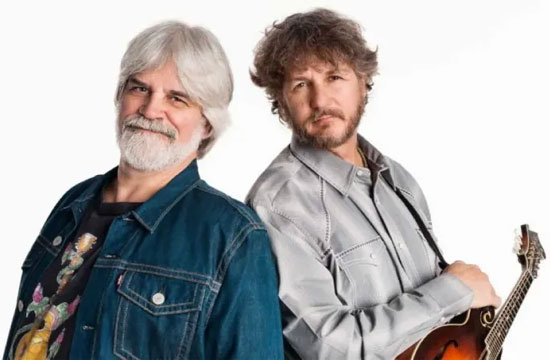 Whenever the two of you are mentioned – within the context of Leftover Salmon or beyond it – the point is made that your music doesn’t fit neatly into a genre. Is that intentional on your part?

We never had a plan on what Leftover Salmon would be stylewise; at the first gig, we just played what we knew without rehearsing, and that became what we played. There was no predetermined intention about what kind of band to be we were just being who we are.

When you combine different styles, you highlight the commonality between those styles, sometimes showing a connection that might not have been readily apparent. How would you put that connection into words?

We definitely love to see the connection between styles. Rock, punk, Americana, blues, jazz … all those things are our folk music. Folk is just the music of the people and we love it. That’s what we play, and we find that common thread through playing it on Bluegrass instruments.

This tour looks to be an opportunity for each of you to dig deep into your catalogs, to play songs that audiences might not have heard live, or at least not in a long time. What are some of your favorite songs from the earliest days of your repertoire that you might revisit on this tour, and what makes those special?

We have quite a few songs that have been in our repertoire since the beginning. Some Calypso songs, traditional bluegrass songs songs that we wrote back in the day still work. Most of our shows are – and have always been – a mix of old and new material.

Other than the fact that this tour will be an acoustic, pared-down answer to Leftover Salmon, how will it be different than your performances with the group?

The duo tour is going to allow us to do songs from way back that we haven’t done and just wing it without a set list. Drew and I have been together all these 30 years, and we remember most of the songs. Though maybe the rest of the band has not done them, he and I can do [these tunes] together. And that makes it incredibly flexible. We might even play songs that Drew doesn’t know or that I don’t know! The duo thing is ultimate freedom.

Detractors of the jam band scene sometimes characterize it as indulgent musical self-gratification. How do you respond to that?

The jam band scene is definitely not about re-creating the radio mix. It’s about using the song as a vehicle for expression. Hopefully it doesn’t get too noodly; I think the nature of bluegrass music is that the songs don’t really veer from the form. Generally, there’s a melodic thread running through, so you can remember what song you’re playing! Jam bands aren’t for everyone, though. We are definitely a subculture.

The improvisational nature of jamming onstage can afford the opportunity for a new idea to present itself in real time. How often does that happen to you, and are you able to “capture it,” so to speak, so that you can use it later in a songwriting or arranging context?

I’m always looking to relate songs to what’s happening in real time at the gig. And I’m more than happy to change the words to the song if if I can make people feel more present by talking about what we’re all doing right now. Improvisation is the ultimate way to make people be present. We do that with the whole-band setting, but the duo [format] gives us even more freedom to pursue ideas on the spot.