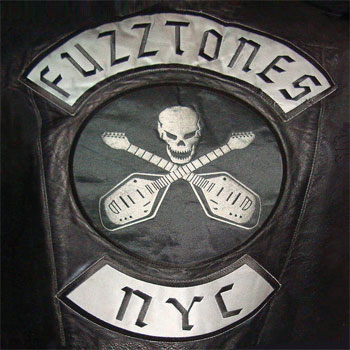 Though they first came on the scene in the middle of the ‘80s garage rock revival, The Fuzztones have endured. And they’ve remained busy this past decade and a half. Not even considering the three books Rudi Protrudi has authored – nor the documentary film that’s been in development – there’s been a steady stream of material from the band.

So in terms of doing something different, in terms of coming up with a concept or central idea upon which to build a new album, what remains?

NYC; that’s what. Four decades after its founding, the band led by Rudi Protrudi goes (figuratively if not literally) back to its Noo Yawk roots. NYC is a collection of fifteen new tracks, all covers of songs from acts whose work informed, inspired and/or influenced the Fuzztones.

That said, the album starts off with a very left-field choice: “New York, New York.” While the choice may seem sacrilege to some, the recasting of the tune works surprisingly well, with Lana Loveland’s spirited piano work helping bridge the gap between garage and old-school adult pop. Not than anyone asked for such a thing, y’understand. But ultimately it does work, and far better than (for example) Sid Vicious’ “My Way.”

A cover of “Flip Your Wig” waxed in 1976 by Wayne County and the Backstreet Boys (the original ones) finds the Fuzztones back in more familiar territory; they stomp their way through the tune, managing to make it more melodic without altering its sleazy, glam-punk character.

The same approach is applied to the Cramps’ New Kind of Kick,” the Ramones’ “53rd & 3rd,” the Dead Boys’ “High Tension Wires,” Mink DeVille’s “Let Me Dream,” a searing reading of the New York Dolls’ “Babylon,” Richard Hell’s “You Gotta Lose” and so on. The Fuzztones make these songs – classics all, though few were commercial hits in any sort of meaningful way – their own.

But the Fuzztones understand that ‘70s New York music was about more than punk. The attitude – if not the sound – carried through to other acts and other periods. They acknowledge that fact by covering the Fugs (“Skin Flowers”), Blue Öyster Cult (“Transmaniacon MC,” suggesting what the tune might have sounded like in the hands of Sean Bonniwell’s Music Machine) and Wave-era Patti Smith (“Dancing Barefoot”).

And the band doesn’t allow itself to be painted into a corner instrument-wise; the Fuzztones bend the songs to their aesthetic, using piano more than on any of their recent recordings. Listeners who have followed the Fuzztones in recent years won’t be put off by the band’s refusal to be hemmed in by outdated ideas concerning what is or isn’t “garage rock.” In their hands, these songs – many of which have been forgotten – gain new life. And that means that NYC is a creative success.