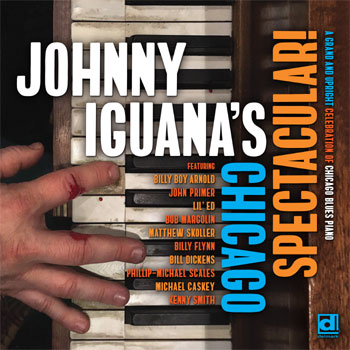 Pianist Johnny Iguana (born Brian Berkowitz) may not have been born in Chicago, but he’s long since made the Windy City his home, and his understanding of Chicago blues is deep and finely textured. Iguana comes from – and is central to – a scene that extends beyond the blues; he’s grounded in punk, jazz, r&b and rock ‘n’ roll as well. But there’s a definitive blues sensibility that fuels whatever musical endeavor to which he applies his inimitable talents. Among his credits: He played with Junior Wells for three years, was a key player in the 2015 all-star tribute project Muddy Waters 100, and he currently leads the wonderful (and wonderfully hard-to-classify) Chicago band The Claudettes.

But for his latest project, Iguana has focused his attention squarely upon the blues. The dozen cuts on the aptly-named Johnny Iguana’s Chicago Spectacular! showcase his forceful yet precise command of the piano keyboard. He’s joined by an impressive roster of sidemen, including guitarist Bob Margolin (on an incendiary reading of Roosevelt Sykes’ “44 Blues”), John Primer, Lil’ Ed (of Chicago’s beloved Blues Imperials), Billy Boy Arnold and many others.

Yet it’s Iguana who remains at the center of this particular musical universe. His rollicking piano work is deeply expressive, and he coaxes an astounding swath of variety out of the acoustic instrument. Iguana’s approach to playing is a case-in-point reminder that the piano is as much a percussive instrument as anything else. And he rocks the daylights out of the thing, sometimes playing with dizzying speed (check his original “Big Easy Women”), other times taking a more slow and nuanced approach (as on his cover of Otis Spann’s “Burning Fire”). And then there’s his original “Land of Precisely Three Dances,” in which Iguana displays both approaches, back and forth, in the context of an instrumental lasting under three minutes.

In an era dominated by digital downloads, Johnny Iguana’s Chicago Spectacular! proudly heads in the opposite direction with its CD release: the album features extensive liner notes by acclaimed Chicago-based music historian Bill Dahl, including brief biographical sketches of some of the city’s most important ivory-ticklers. Dahl gently (yet convincingly) makes the case that Johnny Iguana is earning a place among those names. And in a time when most studio recordings make use of digital plug-ins and virtual instruments, Iguana’s instrument of choice on this record is a 100-year old Chicago-built upright piano.

As is the case with his work in The Claudettes, Johnny Iguana’s Chicago Spectacular! defies easy classification. True enough, he’s covering songs by Spann, Sonny Boy Williamson (or at least Williamson’s reworking of Robert Johnson’s “Stop Breaking Down Blues”) and Willie Dixon (“Down in the Bottom”). And he bends songs chiefly thought of as guitar tunes (like Elmore James’ “Shake your Moneymaker”) into a piano-centric form.

But he also ventures beyond the blues to tackle the soulful “Lady Day and John Coltrane” by Gil Scott-Heron. And Iguana’s original compositions fit seamlessly into the context of the great compositions written by blues giants. In fact it’s a testament to Iguana’s taste, eclecticism and superb musicianship that all of the pieces selected and/or written for the album hang together as a cohesive and splendidly satisfying whole.