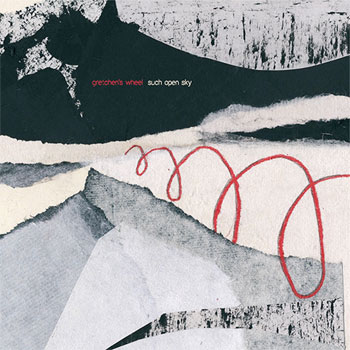 On Such Open Sky, her latest album as Gretchen’s Wheel, Lindsay Murray takes a turn that’s both darker and more energetic than what has come before. From the opening strains of “You Should Know,” it’s clear that Gretchen’s Wheel circa late 2020 is a great leap forward. While her previous work has been highly melodic and supremely engaging, there’s a complex weave of emotion here that somehow leaves it all in the dust.

Maybe it’s the production aesthetic, or maybe it’s the songs themselves. (Actually, it’s a bit of both). But there’s a character that’s moodier than before … moodier but even more alluring. Songs like “Interloper” place Murray’s gentle vocals at the center, but there’s a finely textured arrangement that wordlessly hints at danger, at small yet hard-won triumphs, at a life that’s being lived.

In one sense, it’s a solitary record; Murray self-produced Such Open Sky at home in the tiny, north Tennessee town in which she lives. (And her production skills – long since proven – are applied even more adroitly here than before.) But she enlists several musicians to help on various tracks, most notably Nick Bertlin, who was her right-hand man on 2018’s Black Box Theory. Yet none of those musicians worked with Murray in three-dimensional space and time; all of their work was done remotely. This is the Year of the Pandemic, after all.

Thing is, you wouldn’t know that if I didn’t tell you (or if you didn’t read the liner notes). The sound and feel of Such Open Sky is one of a tight band, a close collective of simpatico musos, doing their thing together and doing it well. From the subtly spaghetti-western guitar tones of “Heat Death” to the reflective melancholy of “Land on Zero,” this is an album that rewards musically and lyrically. “Infernal Machine” has a crunchy roar that begs to be cranked out in a stadium-sized audience (after we’re all vaccinated, o’course). But Murray’s dulcet pipes provide a striking contrast that gives the song its tension.

Murray takes a slightly unorthodox approach to providing a lyric sheet. Rather than display the words in a kind of meter — with slashes and line breaks to indicate where the phrases end – she prints each song’s words as its own paragraph. So while there are rhymes, they disappear into the text. The words to her songs read like personal notes written to someone. Herself? An unknown third party? You, even? The answer – probably all of the above – isn’t really the point. The point (or mine, at least) is that Murray’s lyrics hold up as interesting, engrossing reading, and they work every bit as effectively within the context of her largely minor-key musical vignettes.

And for those who might think of Gretchen’s Wheel as a powerpop project, you’ll be pleased to learn that the select coterie of assisting players on Such Open Sky includes member of the Posies and Nada Surf. And as good as they are, the resulting album is most assuredly not a powerpop effort. It does more than transcend that subgenre’s confines; it confidently leaves them in the dust.

Oftentimes when I review an artist’s work – especially when I suspect that many of my readers may not be familiar with that artist’s music – I endeavor to lay out some touchstones: it sounds like this artist, it feels a bit like that one, it bears the influence of that other artist, and so on. I’m not doing that here. And it’s not because I’m being cagey. It’s because on Such Open Sky – and more so than ever before – Gretchen’s Wheel doesn’t easily call to mind anyone else. To be such a true original — and to make music that draws the listener in — is a triumph.