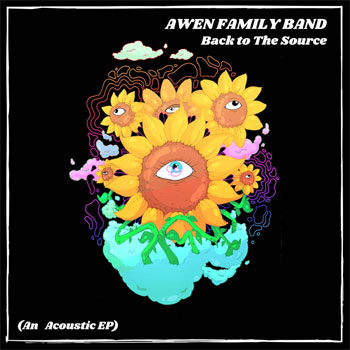 The concept of family can be a fluid one: beyond genetic connections, for many it represents a circle of people with a common set of concerns, goals or values. In the case of the Awen Family Band, it represents a shared focus on musical expression. The group has recently released Back to the Source, an acoustic EP.

The group is a musical collective built around the core of Jackson Weldon, formerly of Dr. Bacon, and former Freeway Revival guitarist Tim Husk. The rest of the group’s lineup is ever-changing.“We tend to have a changing cast,” Husk says.

That informal approach is carried through in the group’s music. The Awen Family Band “started out with the idea of going to festivals and just hooking up with other people there to play late night,” Husk says, “and then [building] a songbook.” The like-minded musicians are “just vessels for the muse,” he says. The shared goal is to allow “the inspiration to flow through us, and to not take it so seriously.”

Standing in contrast to the Awen Family Band’s easygoing vibe is the fact that in the space of only 18 months, the group has produced no less than a dozen releases. “The reason for so much of it is because there’s just so much different music that happens,” says Husk. All of the group’s releases are live recordings, made either in front of an audience or live-in-the-studio.

That sense of immediacy is key to the Awen Family Band’s aesthetic. “We’re trying to honor the sound that comes out of the moment,” Husk says. That means that extemporaneous sessions make use of “found” instruments alongside more conventional ones. These days the group often plays in backyards with only a small gathering of listeners, but that was the concept even before COVID-19. 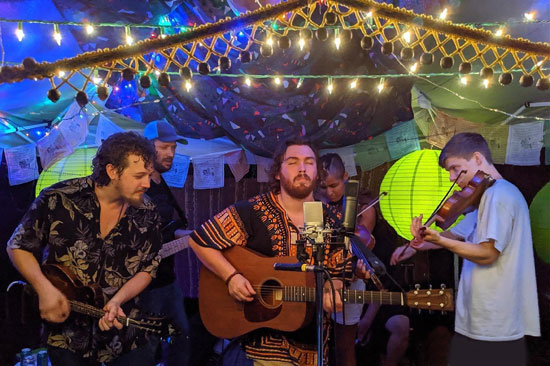 “That’s where this idea spawned from,” Husk explains. “Sitting around the kitchen table, people beating on the table, grabbing pots and pans, playing random instruments to create music right there.” And Back to the Source captures that spirit. “It just feels like a bunch of folks hanging out in the backyard,” Husk says.

The rootsy feel of the music also reflects the shared philosophy of the musicians involved. “I like the idea of ‘from the beginning, to the beyond,’” Husk says. “When we’re playing, we have to reach all the way back to the beginning for all that inspiration. And then we’re pushing it all the way forward.” He says that them music is meant to convey the idea that “we’re right in the middle of that, and we’re all connected in a way,” Husk says. He says that The Awen Family Band hopes to “allow the space for people’s hearts and minds to get there too, if they’re not there already.”