Kevin Godley: The Consequences of Remote Collaboration (Part 1 of 2)

In 2020, working remotely is commonplace. Even before circumstances required it, many people found that working from home could be just as efficient as showing up to a formal workplace. Creatives and musicians, of course, have known this for longer than most. Elton John and Bernie Taupin famously collaborated by mail for years, putting words and music together without being in the same room.

Today, technology has made remote collaboration even easier. It’s now commonplace for, say, a guitarist to record his or her lead parts in a home studio and then email a high-resolution WAV file to someone else, who in turn adds those parts to a track already in progress. Entire albums – good ones, even – are made by musicians who’ve never met in what we used to call “real life.”

Some artists have taken this concept even farther. Celebrated video producer, songwriter and musician Kevin Godley (10cc, Godley & Creme) is one such artist. And it stands to reason that Godley would push the boundaries of the creative process in this way. “I straddle so many different mediums,” he explains. “Music, film, writing, video, and so on and so forth; I sort of hop from one thing to another.” 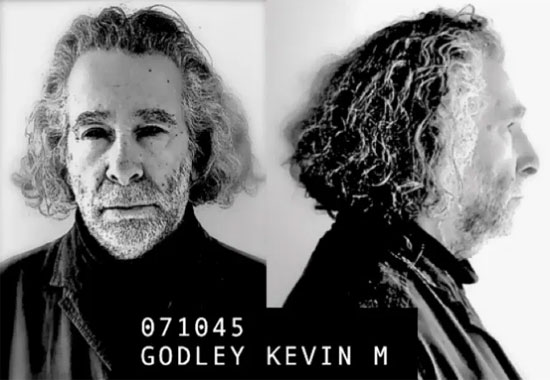 Around 2015, he was contacted by a couple of musicians with whom he had no previous communication. “I think they were both reaching out to people who they would like to work with,” he explains. “I was on both their lists. So they sent me a couple of instrumental tracks for a project they were working on.”

Godley was intrigued, and he found the subsequent experience of remote collaboration a creatively rewarding one. The success of that project sparked a bigger idea. “My thought was, ‘Okay, if I’m a natural collaborator, why don’t I put this out to the general public instead of professionals?’ Because there are so many people who make music on their own in their bedrooms and [who] have mastery of instruments.” He thought it would be even more interesting to open the concept up to a wider group of potential participants.

Godley explains that the project – which would come to be known as Muscle Memory – consisted of two ideas at play. “One was to try to get some samples of music in from people, and the other one was to raise enough money to actually finish the album,” he says. Fans would provide the music, and Godley would write the lyrics.

So in summer 2017, he put out a call to fans, inviting them to collaborate with him on songwriting. The response was overwhelming. “I got a lot of contributors,” he says with a chuckle. “I got 286 pieces of music sent to me! It was incredible to get that many submissions of music, to hear what people are actually doing out there. Such a vast array of different genres and sounds.”

Unfortunately, the platform Godley had chosen to use for this novel collaborative venture was PledgeMusic.

A direct-to-fan music platform launched in 2009, PledgeMusic was designed to connect artists and fans in the early stages of creative projects, providing financing for recordings while affording fans the opportunity to support and interact with their favorite artists. While it wasn’t created with the idea of the sort of collaborative project Godley had in mind, PledgeMusic’s infrastructure seemed a good fit for Muscle Memory.

But as fans and potential songwriting collaborators signed on to the Muscle Memory project, PledgeMusic was going down the tubes. Financial mismanagement led to the platform shutting down in July 2019 and declaring bankruptcy soon thereafter. Several artists – including alternative rock band Failure, multigenre composer John Zorn, musical satirist Neil Innes and Kevin Godley – went unpaid for money owed via pledges. An untold number of fans who pledged also found themselves empty-handed as well. With droll understatement, Godley says, “That was a little bit of a disappointment.”

Happily for all concerned, State 51 Conspiracy (“an unusual company,” says Godley) approached him with an offer to provide financing to finish Muscle Memory and release the album. So Godley got to work. And while he says that “at least one” of his collaborators is a name some might recognize (Australian singer-songwriter Gotye, co-writer of “Song of Hate”), his chosen method of working kept his partners anonymous during the process.

“When I started listening, I didn’t want to know who was sending me the music,” he explains. “Because I didn’t want to be influenced by names. I would listen to something, and [decide] whether I felt I could work with that particular piece of music or not.” Only once a song started coming together would he let himself know who had submitted the material. “It was a matter of trial and error,” Godley says.

The songs didn’t all come in at once. “Maybe three or four one day, ten on another day, next week nothing, then five,” Godley says. “I was peeling them off as they came in, taking notes about each one, and putting them into separate lists of preferables, potentials and definitely-nots.”

Godley says that a few submissions had the feel of having been written to conform to what people might have thought his music should sound like. “I maybe got about half dozen that I could sense they were trying to give me something that they thought would attract me,” he says. But those ran counter to the instructions he had provided: “Don’t send me anything normal.”

Instead, Godley says that he was interested in submissions that didn’t stick to the “verse, chorus, verse, chorus, middle-eight, verse, chorus, end” format that characterizes conventional pop songs. “So I got extremes,” he says. “I also got stuff from people who didn’t quite understand the brief: they sent me finished songs, which was kind of not really the point.”

In the end, Godley found himself with a remarkable amount of material with which he could work. “And it was a lot of fun,” he says. “In many cases, I had an idea, but it half worked. So I’d park that one and then I’d try another track with the same lyric and it worked much better.” It was a daunting process, but a novel and creatively fulfilling one. “Making music is like sculpting air,” he says. “I’ve just got 286 pieces of air to play with in this case. But what a great experience.”