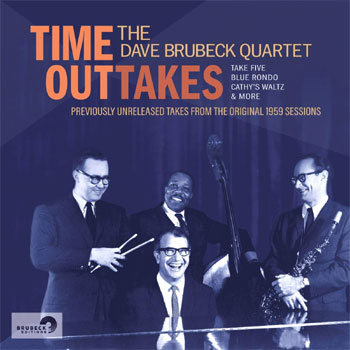 Released in 1959, The Dave Brubeck Quartet’s Time Out is a landmark album. An accomplished synthesis of West Coast and cool jazz, it’s remarkable for combining “unusual” time signatures – defined here as most anything beyond 3/4 and 4/4 – and musical accessibility. As has been documented many times before (and is vividly recounted in my recent interview with Brubeck’s son Chris), the bandleader was inspired to take his jazz in a less-traveled direction after hearing Turkish street musicians. His idea that folk musics are by their nature accessible meant that he explored odd meters in a way that wasn’t off-putting.

For his trouble, Brubeck was rewarded with the #2 spot on the pop chart – the pop chart – in 1961. Time Out was the first jazz album ever to sell in excess of one million copies. As a single, “Take Five” climbed to the #25 spot on the pop singles charts, and #5 on the Adult Contemporary chart. Years later, Time Out would earn a place in the Grammy Hall of Fame, and in 2005 the album was added to the Library of Congress’ National Recording Registry. The album is an integral part of any serious – or casual, for that matter – jazz collection.

Now, more than sixty years after the album’s release, comes more music from the session that yielded Time Out. (Apparently nobody knew this until recently, which gives hope that this sort of wonderful thing will continue to happen.) With a title that’s both clever and too obvious not to use, Time Outtakes presents eight previously-unheard tracks in high fidelity.

Available on both CD and vinyl, Time outtakes opens with an alternate take of “Blue Rondo à la Turk,” the original album’s most well-known number after “Take Five.” But the version here runs nearly nine minutes compared with the less than seven-minute Time Out recording. “Strange Meadowlark” and “Time Out,” on the other hand are both almost exactly the same length as their better-known counterparts. The band – Brubeck on piano, alto saxophonist Paul Desmond, bassist Eugene Wright and Joe Morello on drums – is a cohesive unit, and due to the complexity of the music, there’s not a whole lot of daylight between these “new” version and the ones beloved for decades by jazz fans. But as is often the case on jazz sessions, the differences are easily significant enough (upon close listens) to make them worthwhile at least, essential at best.

Moreover, while the recently-discovered cache of recordings doesn’t include alternate takes of the 6/4 “Everybody’s Jumpin’” or “Pick Up Sticks,” Time Outtakes serves up two songs not on the original LP. “I’m in a Dancing Mood” and “Watusi Jam.” And while studio chatter isn’t something that every purist might enjoy, the undeniable playful spirit and joie de vivre among the musicians is readily evident on hearing the four-minutes-plus “Band Banter from the 1959 Recording Sessions.” In fact it’s a wonderful way to end the album, underscoring as it does that Brubeck’s approach was as exuberant and fun as it was serious and scholarly.