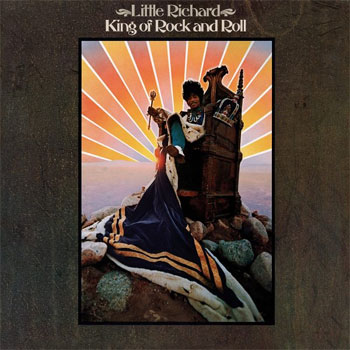 Just slightly more than a year after releasing a well-received (if non-charting) comeback album in The Rill Thing, Little Richard returned with the audaciously-titled King of Rock and Roll in September 1971. But while The Rill Thing’s defining aesthetic was a Southern soul sound (thanks in large part to its being made at FAME Studio in Muscle Shoals, Alabama), for King of Rock and Roll, Little Richard would head in a very different direction.

A gleefully over-the-top introduction by a carnival barker-styled announcer heralds the king’s entrance, leading to the title track. “King of Rock and Roll” is characterized by a retro arrangement, massed female “shoop-shoop” vocals and a brassy backing. The tune signals that this album has more in common with Little Richard’s late ‘50s output than the comparatively modern The Rill Thing.

Drawing on his gospel roots, Richard is in tent-revival mode for “Joy to the World.” A rousing shouted introduction – complete with crowd noises – goes on for a full two minutes before the music starts. The band eventually starts vamping as Penniman leads the crowd in a brief call-and-response. When the music finally comes in, Little Richard seems almost to be parodying himself. And the tune’s curiously muted saxophone solo seems an odd production choice.

King of Rock and Roll relies heavily on covers; a reading of The Rolling Stones’ “Brown Sugar” is credible enough, though it’s reasonable to think that the arrangement worked better live onstage than it does on this record. The far superior “Midnight Special” is delivered as country-gospel; Richard’s trademark vocal whoops effectively imitate a train whistle. And while the tasty, the funkified cover of “The Way You Do The Things You Do” may be the best cut on King of Rock and Roll, it feels more like a stylistic homage to Otis Redding than anything else.

Richard’s original “In the Name” dispenses with the non-musical trappings; it’s more of a piece with The Rill Thing. But the introduction to his cover of Martha and the Vandellas’ “Dancing in the Street” drones on far too long. The song itself sounds a bit like a Rare Earth outtake. Cowritten by producer H.B. Barnum, “Green Power” finds Richard dialing back the intensity in favor of a more smoldering approach that suits him well; more songs in this style would have made King of Rock and Roll a better record.

With its understated horn chart and supple rhythm section accompaniment, the complete reinvention of Hank Williams’ “I’m So Lonesome I Could Cry” takes the song to a place its composer likely could never have conceived. “Settin’ the Woods on Fire” has all of the requisite elements for success, but somehow falls flat. And a cover of Creedence Clearwater Revival’s “Born on the Bayou” suffers from the same needlessly long introduction that mars several other tracks on the album. Again, it probably worked better live.

Not exactly an embarrassment, King of Rock and Roll is merely middling and uneven, and fails to sustain the creative momentum of its predecessor. Oddly enough, on release the LP did something The Rill Thing failed to do: it cracked – if just barely – the Top 200 album chart.