The Mutants
In late 1978, Sally Webster had a giant loft on First and Mission where she often held salon-type events. “A lot of bands played there for their first time; it was sort of an experiment, but it was super fun.” She and some friends recruited musicians “who could actually play instruments,” and launched theatrical punk group the Mutants in late ‘78 or early 1979. The band “was a 50/50 combination of visuals and sound,” she says.

The Mutants’ freewheeling onstage show would build upon the ideas espoused by Free Theater troupe Angels of Light. In that respect, the band’s approach was ahead of the curve, incorporating theatrical concepts into live performance more than a year before bands like New York City-based Plasmatics.

The Bay Area music community of that time was “very inclusive,” Webster says. “It was like, ‘You want to perform? You can perform.’” She describes the scene as “an island of misfit toys: people all coming together, really happy to see each other.” 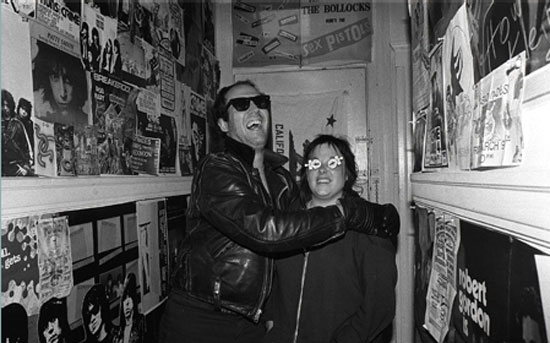 Howie Klein with Sally Webster of The Mutants

Webster says that there was a strong sense of community among San Francisco’s underground and semi-underground bands of that era. “The Avengers, the Dead Kennedys, Flipper … we were all friends before we were in bands, and remained friends after,” she says. And the bands were mentored by Howie Klein and other high-profile figures. “Paul Kantner was really nice to The Mutants,” Webster recalls. “Professionally we were hopeless, but he was always trying to help us.”

That help could only take bands so far, though. “I don’t know that we had any particular goals,” laughs Webster, who today still performs with a latter-day Mutants lineup. “We just kept going. No one was thinking of a recording contract or making a million dollars.”

The most infamous Mutants gig was one held at Napa State Hospital, opening for The Cramps. “We took acid for that one,” Webster recalls. Webster recalls that several of the psychiatric patients came onstage with the band. And although The Mutants played hundreds of gigs, Webster notes that “we never made any money. It wasn’t a job, but we enjoyed doing it.”

The Mutants’ “Baby’s No Good” was included on a 1980 compilation, 415 Music. That same year, the band released a three-song single on 415 Records; one of those songs, “Insect Lounge” is included along with tracks from 20 other bands on the new CD compilation Still Disturbing the Peace. 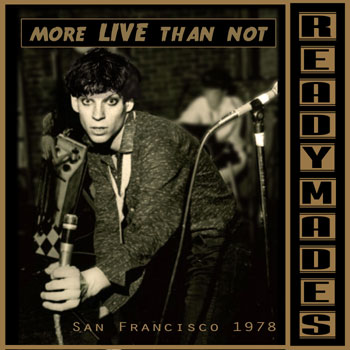 The Readymades
Bassist Jonathan Postal was a founding member of The Avengers. He considers the band one of three “tentpole” groups that established San Francisco’s punk scene. “The others were Crime and the Nuns,” he says. But after playing with The Avengers for some time, Postal realized that if he wanted to play his own songs, he’d have to start a group of his own, one that could become the fourth tentpole band.

“It just didn’t ring true to me when the Avengers took up this mantle of anger and politics,” Postal says. He would look at edgy bands of the time and think, “You’re not poor, working class people.” Postal’s songs drew inspiration from Broadway, as well as from singer-songwriters like Kris Kristofferson, Randy Newman and Leonard Cohen. “If I wanted to play the songs that I’d written, I had to find real musicians,” he says.

The San Francisco punk and new wave scene of the time was different from comparable scenes in New York City and London. “Even though there were rivalries and factions, it was very small,” Postal says. And in a sense, it included people form an earlier music scene, bands like Jefferson Airplane and the Grateful Dead.

Thanks to supporters like Klein and Bill Graham, local new wave and punk acts gained high-profile gigs opening for national bands touring the West Coast. “You’d have the Nuns opening up for the Ramones,” Postal recalls. “When the Sex Pistols came, the Avengers opened up for them. The Readymades opened for Blondie and The Police; the first really big show we did, we opened for Patti Smith.”

As their choice of band name would telegraph, The Readymades combined a more literate lyrical approach with the raw power of punk, helping to connect the new music with the artistic sensibilities of Andy Warhol and Marcel Duchamp. San Francisco Art Institute graduate Postal showed that punk could be lyrically sophisticated without losing its edge.

Readymades songs were, Postal says, “very melodic, but I had a lot of strange stuff in there. And that was probably the reason the band fractured: Other people in the band were being told, ‘Hey, if Jonathan didn’t have this quirkiness, you guys would be really big.’” But the Readymades had a loyal local following, and they toured outside the region. 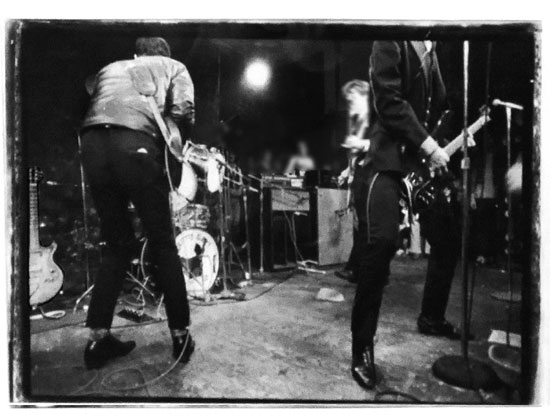 Howie Klein played The Readymades’ songs on his radio show; other deejays picked up on them, too. Their self-released single “Electric Toys” was in regular rotation on KSAN. And at the direction of manager Sandy Pearlman, the band recorded a number of songs. “We did demos for all the major record labels,” Postal says. “That’s why we have such a small [official] output.”

One of those songs was “415 Music.” It’s a sardonic look at the San Francisco music scene. “Everything I wrote was kind of snarky; all my songs have little jokes,” says Postal, but he was surprised that listeners picked them up, surrounded as they are by speedy punk arrangements. “I consider it lucky that people can even name the song after hearing it!”

Howie Klein liked the song’s title, and he put together a various-artists collection of local bands on his new 415 Records. The Readymades stayed together about three years, but never landed a deal, and didn’t release an album. Happily, Liberation Hall’s new San Francisco: Mostly Live collects nearly all Readymades recordings in one place. 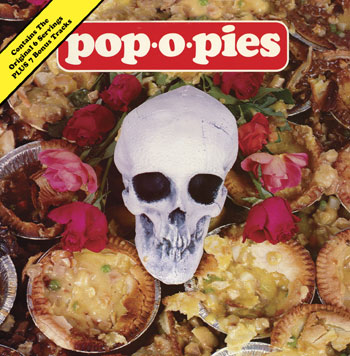 The Pop-O-Pies
Joe Pop-O-Pie (born Joseph Callahan) recalls hanging out at college with his fellow music majors. “We were talking about new wave and punk, and somebody said, ‘Wouldn’t it be interesting if somebody did a punk version of the Grateful Dead’s “Truckin’”?’” So he did: he put together The Pop-O-Pies, and initially, the group played only that one song.

It wasn’t exactly a piss-take on the Dead (or Deadheads), though. “It wasn’t a slam,” Joe insists. “It was more like … an experiment.” And the Pop-O-Pies one-song set list earned the band some fans in high places. “Jerry Garcia liked it,” Joe says with pride. “They’re good sports; they’re cool people.”

Yet at first, the audiences gave an evening of “Truckin’” a mixed reception. “They would start chanting, ‘Play something different!’” Joe recalls with a laugh. “And of course that would just make us want to play the same thing more.” Perhaps because the Pop-O-Pies took their name from Zippy the Pinhead’s favorite snack, Joe provides a food-and-drink metaphor: “People like sugar in their coffee, so it’s like if we took the top off the sugar flask and poured the whole thing in there.”

Though there was certainly more to the group than its reinvention of a Dead classic, The Pop-O-Pies irreverent take on rock royalty hinted at a future musical landscape that would embrace satirical, high-concept genre-smashing acts like Dread Zeppelin, Beatallica and Mac Sabbath.

On one hand, Joe says that his group was solidly in the punk/new wave genre. But at the same time, he wanted to push the limits of that label. “To my knowledge, I was the first white guy to ever put rap and punk on the same record, on The White EP,” he says.

And Joe admits that calling The Pop-O-Pies a group is probably inaccurate. “It’s really kind of me and this blind tribe of musicians that I play with,” he says. At various points The Pop-O-Pies included Danny Heifetz and Trey Spruance (Mr. Bungle) and Klaus Fluoride (Dead Kennedys). And for a time, The Pop-O-Pies and Faith No More were essentially the same band. 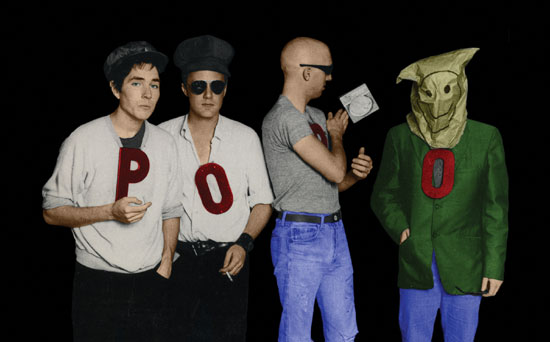 Joe recalls how The Pop-O-Pies got signed to 415 Records in 1981. “I walked into KUSF one day; Howie Klein was a DJ at the time. I said, ‘Hey, could you guys maybe cart this up and play it on the radio sometime?’ I didn’t realize how popular it would be!” Both “Truckin’” and an original, “The Catholics Are Attacking” became the most requested songs on the station. “Howie had a label, 415 Records, so he eventually got in touch with me and made a proposition,” Joe says. “It sounded good, he made me a deal, I went for it, and the rest just happened.”

After releasing The White EP on 415 Records, the group toured North America a number of times. But Joe says that tone of the most memorable gigs was in December 1982, opening for Oingo Boingo. “I got this idea because there was so much backstage beer. There were all these kids down in the front, and I just had this wild idea to start selling the beer for $1,” he laughs. “That didn’t go over too well.”