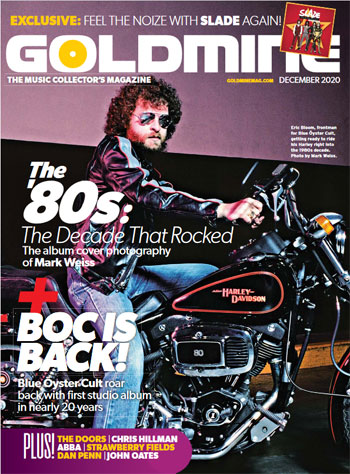 Career of Evil
There are many connective threads that runs through Blue Öyster Cult’s body of work. 2001’s Curse of the Hidden Mirror took its title from a 1969 song recorded by the band (then known as Stalk-Forrest Group) as part of a demo recording for Elektra Records. And a track on The Symbol Remains is titled “The Return of St. Cecilia,” connecting it to another Stalk-Forrest Group tune, “St. Cecilia.”

Bloom explains that lyrics to the new song were written by Richard Meltzer, who co-wrote the ‘69 tune with the nascent band as well. “Our manager got in touch with Richard – we don’t see him too often; he lives in Portland – and asked him if he had any lyrics.” Meltzer sent some to the band, but they sat unused for a time while the members were busy with other parts of writing for the album. “And then,” Bloom recalls, “after a couple of weeks, Richie sent out an email to everybody: ‘Is anybody working on that “St. Cecilia” thing?’ Buck and I both said no, and he said, ‘I’ve got an idea for it.’”

Throughout its history, BÖC has combined its hard rocking sound (often classified as heavy metal back in the ‘70s) with lyrics that display a more literate side than standard rock fare. Some of that comes from within the group itself, and other times it’s thanks to the contributions of writers like John Shirley, esteemed rock critic Meltzer, science fiction author Michael Moorcock and poet/rocker Patti Smith. The band’s lyrical approach often meld darker, horror themes with humor, resulting in classics like “Godzilla” (a Buck Dharma composition featured on 1977’s Spectres) and “Joan Crawford,” a macabre highlight of 1981’s Fire of Unknown Origin.

Buck Dharma and Eric Bloom agree that the outside writers don’t make an effort to adopt a “BÖC style” when coming up for lyrics for the group. “I don’t know how much conscious effort or intention [there is] on the part of the other lyricists,” Dharma says. He cites his working relationship with John Shirley as an example. “John has been our primary outside lyricist for the last 20 years; he’s very prolific, and he’s an artist himself. It’s my experience that I choose the stuff of John’s that I can work with. We sort of curate his output to our needs, rather than John writing specifically for us. And that’s probably the same in the case with the other outside lyricists that we’ve used as well.”

The dark humor that suffuses many Blue Öyster Cult songs comes naturally, too. “We’re always looking for humor, especially as a side note of an intention,” Dharma says, adding, “We’ve never taken ourselves too seriously … although fans [sometimes] take us very seriously.” 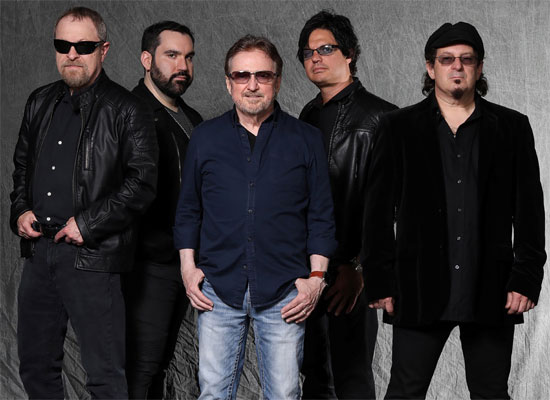 On Your Feet and Back on the Road?
In the band’s early days, Blue Öyster Cult earned its reputation as an exciting live act, with shows sometimes culminating in an “axe battle” where three guitarists treated their instruments like swords in combat. In the days before concert films were ubiquitous, live albums were the primary means of putting across the energy of a concert into a product fans could enjoy at home. Over the course of their existence, BÖC has released no less than seven live albums. Released more than a year before the group scored its first charting single “(Don’t Fear) The Reaper,” 1975’s Gold-selling On Your Feet or On Your Knees represented a major breakthrough.

“The live records were the turning point for us,” says Buck Dharma. “On Your Feet or On Your Knees came out, and then we had three albums with hit singles on them after that.” Subsequent live albums would continue to document the band’s undeniable power onstage, as well as BÖC’s rapport with audiences.

“It’s certainly unusual” to be off the road in 2020, Dharma admits. “In my time, we’ve never been off.” The band’s concert calendar for the year was scrapped in March, and since then they’ve appeared onstage only twice. One of those was a drive-in gig in New Hampshire in July “And that was very successful, so we’ll do more of those,” he promises. As much as is possible in the pandemic era, Blue Öyster Cult is determined to deliver the concert experience. “You’ve got to social distance, but [we have] a real stage, real lights, real big-screen video.”

Eric Bloom says that performing live keeps him active. “I have a few aches and pains like most guys my age,” he says (Bloom turns 76 in December). “But I looked at my college yearbook, and most guys my age are fat and bald!” He credits the rock ‘n’ roll lifestyle for keeping him comparatively youthful.

“Not many people would want to get up at 5 a.m., go to the airport, take two flights and then do a soundcheck at 4 p.m. and a show at 8 p.m. and then get up the next day and do it again,” he says with a laugh. “Most people would find that it’s okay for a few days, but it might wear on your after a while.” Eric Bloom has been doing it for nearly half a century.

Buck Dharma feels the same way, and says that he and his band mates are all looking forward to return to the road as soon as it’s practical and safe to do so. “I foresee the pandemic dying down, and I also foresee more workarounds for live performances,” he says. “Because people want it, and the artists want it. Let’s face it: Live music is how a lot of people make their living; they’re really hurting, not being able to play live.”

Sole Survivors
While many other bands launched in the late’ 60s and early ‘70s are long gone, Blue Öyster Cult is still making new music that exemplifies the melodic-yet-hard-rocking style it perfected decades ago. Dharma notes that back in the band’s early days, record companies took a very different approach to their signed acts than is the case today. Their initial run of albums – 1972’s Blue Öyster Cult, Tyranny and Mutation from 1973, and 1974’s Secret Treaties performed only modestly on the charts. “We did the first three records for Columbia, and – God bless’em – they didn’t drop us,” Dharma says. “In the old days, the label was in it for the long haul; they signed us to a seven-record deal. They stuck with us in a way that most record companies wouldn’t do today.”

Buck Dharma is circumspect about the terms of the band’s current deal with Frontiers, but there’s good reason to think that fans won’t have to wait 19 years for a follow-up to The Symbol Remains. “I’m actually a little surprised we made this record,” admits Dharma, who turns 73 in November. “I think we’re going to just watch and see what happens to [the new album]. If it’s really successful, I’ll think there’ll be an incentive to make more records. I certainly wouldn’t mind.”