For Howlin Rain’s Ethan Miller, the Truth is in the Mix

Ethan Miller is a big fan of live albums. The founder, songwriter and guitarist in Howlin Rain names The Grateful Dead’s landmark 3LP set Europe ‘72 among his favorites, along with 1969’s Live/Dead. But he’s more than willing to acknowledge that some classic “live” albums – Bob Seger’s Live Bullet and Thin Lizzy’s 1978 Live and Dangerous foremost among them – have undergone so many post-production fixes that they’re arguably not live albums at all. Yet that doesn’t mean he doesn’t enjoy them. But for his own band’s live releases – like the new Under the Wheels: Live from the Coasts Vol. 2 – his guiding principle is answering this question: “How do I represent the feeling of what it was like to be there?”

It’s not as easy as it might seem, Miller believes. “There’s the idea that you can go so far, like Live and Dangerous,” he says with a chuckle. “First, they were going to go [back into the studio] and redo the guitar solos. Then, famously, by the end all that was left [from the live source tapes] was the original hi-hat!” 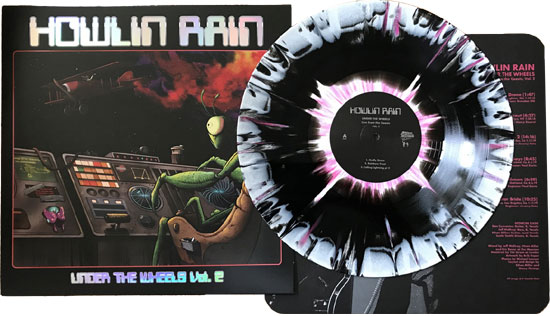 But Miller says that live recordings are “all about suspension of belief. It’s really about capturing the feeling of being there. “You don’t want the facts to get in the way of the truth,” he quips.

“If you’re hearing harmony vocals live in a room over a rock band playing, 99% of people in the room aren’t clocking whether they’re perfectly ‘in’ or ‘out,’” he explains. “They’re just like, ‘Great, that’s a great feeling. Look at them singing the four-part harmonies!’” But a recording of that sound exposes the warts-and-all looseness of what actually came out of the speakers. “When you [consider] those things under a microscope, on a clean mix, it may feel completely different: bad, distracting, grating,” he says. “But that’s not the truth of how it felt.”

For Howlin Rain’s latest live album – the second in what he plans as an ongoing series akin to the Dead’s Dick’s Picks album series – Miller used as light a touch as possible in post-production. So if he or one of his band mates (guitarist Dan Cervantes, bassist Jeff McElroy and drummer Justin Smith) hits a bum note or fumbles on the beat, he may or may not fix it in the mix. “If it doesn’t take [the listeners] so far out of the experience that they say, ‘That was a terrible moment that I have to hear over and over on those live records for the rest of time,’” Miller says that he’s inclined to leave the mistake on the final master.

Happily, on the performances captured on Howlin Rain’s latest – culled from tapes of shows from 2018 and ‘19 in Washington, New York City, Los Angeles and Oakland – the band is on fire, playing with a deft balance of ragged- and right-ness. Electrified readings of tunes like “Coliseum,” first heard on the band’s 2015 album, Mansion Songs, benefit from the energetic full-band musical interplay. The group takes the opportunity to stretch out and let the songs breathe, yet the players never let the tune get away from them; there’s no aimless noodling.

Miller appreciates live and studio recordings as two sides of the same coin. “Sometimes, songs make it into the [live] set to find out how they can live and breathe on the stage, and then they’re recorded later,” he says. Other times, some tunes are played live but never officially recorded for release. “There’s a place for those kinds of recordings,” Miller says. “And they’re usually called ‘bootlegs.’”

Music recorded in a studio has a different character. “When you listen to studio records, you can tell there’s a certain artistic mission and time and care that went into them,” Miller says. “When you see the live show, there’s a poignant, psychic, geographical, and creative place that is separate” from that.

And there’s a fluid relationship between the two, Miller believes. “The link is the creative content and the technical aspect of having to use studio assets to wrangle a suitable release,” he says. “Maybe every band would [like to be able] to say: ‘We’re amazing at both!’”

Miller doesn’t make that claim for himself and his band. But he truly enjoys the studio experience as well as playing onstage in front of an enthusiastic audience. “I love them both,” he enthuses. “I love the process. Creating and writing a record, rehearsing and arranging it with the band in a warehouse down by the Mexican border, that’s a completely different headspace than when we hit the stage with all of its sweat and tensions and, hopefully, unconscious creative work.”

And as Under the Wheels Vol. 2 illustrates, Howlin Rain uses live performance in part as an opportunity to cast the songs in a different light than their studio counterparts. Miller cites Bob Dylan as an inspiration in that regard. “Listen to any of his concerts from any time,” he suggests. “He’s constantly rearranging [songs]. But somewhere in there, he’s trying to keep that original creative spirit completely alive, and in the moment.”

That approach can keep things interesting for the performer, but it comes with risks. “Sometimes you go to a gig,” Miller says with a laugh, “and you’re like, ‘God damn it, man, just give me the tune here!’” Acknowledging that Dylan has long since reached the point at which he can do whatever he wants, Miller explains how he’s different. “I’m a real believer that this isn’t just about me,” he says. “I’m not just making music for me. But the engagement – once people begin to love a song of yours – is something different. It’s not just yours anymore. And that’s a long way to say that I try to serve [both] those masters.”

And Miller aims to thread the same kind of metaphorical needle with the Under the Wheels live albums. “That’s the purpose of creating this live series,” he says. “They’re the perfect place for this series of [musical] Polaroids, each a snapshot of something that happened.”