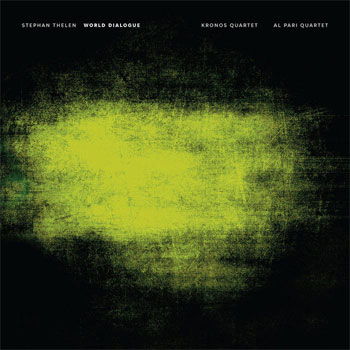 The other track on World Dialogue, “Circular Lines” was the piece that inspired the entire project. It was written specifically for – and is performed on the album by – San Francisco-based (and world famous) ensemble Kronos Quartet.

During an interview primarily focusing on Kronos Quartet’s own new release, Long Time Passing: Kronos Quartet and Friends Celebrate Pete Seeger, I spoke with Kronos violinist and founder David Harrington about the “Circular Lines” and the larger endeavor of which it is now a part. Here’s a lightly edited transcript of that part of our conversation. – bk

Yes, “Circular Lines,” I did receive a demo. We receive a lot of demos. I mean, the first demo that I ever got was “Different Trains” by Steve Reich. So, our demos go back a ways.

How much room for interpretation is there in a case like that, and how does Kronos’ performance of “Circular Lines” differ from the demo?

Well, there are all kinds of articulation possibilities, sonic possibilities. Working with the sound and the texture, my experience is that demos are pretty flat, usually. But, having said that, we do a lot of work with music that is performed and recorded. Then, a translator – like Jacob Garchik, for example; he did all of the Seeger arrangements or translations – will translate that recording into musical notation. And we will then interpret that notation. Then, we arrive at something that is not like the original.

For example, Jacob did a fabulous version of the funeral ritual of the Aka Pygmies for Kronos; it’s one of my very, very favorite pieces of music. It’s performed as a community around the body of an elder or someone that has died. During that ritual, the community is teaching the kids how to sing, and you can hear that happening. I thought, ‘Somehow, I want this in Kronos’ music.’ So I sent the recording to Jacob, and he figured out a way to notate this in a way that we could put it in rehearsal and then work with it ourselves.

Now, that’s just one way that we have done this sort of thing. So, is that a demo? It’s not a demo in the sense that that is the performance, the actual field recording that was made. But it is a demo in the sense that, for us, it became the source material. The score, really, the aural score. Then, Jacob turned it into a notated score, then we consulted the aural score and notated score and made our interpretation. 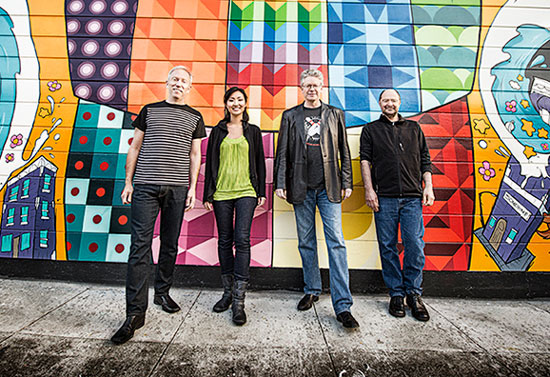 Please tell me more about the library of works that you’re building for Kronos’ “‘50 for the Future” repertoire, of which “Circular Lines” is now a part.

What we’re trying to do is make a body of music available to other players around the world, make it available to them for free: the scores, the parts, our recording, source material, interviews with composers, videos, all kinds of information. And we are making that available: you can go on the Kronos website right now and go to “50 for the Future.” At the moment, there are 35 pieces that are fully available.

After March 13th, it became very clear that quartets all over the world could not rehearse. Okay, so what can be done in this instance? I was speaking with Angelica Negrón about this problem, and she came up with an ingenious solution. So, there is a piece – the most recent one – that can be played on Zoom. With the latency problems and all the problems that exist, the piece works. She even commissioned an artist to make a backdrop for every one of the players. So, the backdrop is available on the website as well.

So, anyway, the idea is a result of realizing that almost all of our music is basically not available in any music library in the world. If you’re a young player, for example, and you want to play a Kronos piece, you could not go to the San Francisco Public Library, the UC Music Library; wherever you’re thinking of, you could not go there and find almost any of our pieces. So, we felt we needed a solution to this informational problem, really. The idea is to make a wide ranging palate of music, of approaches to notation, culture, sound available, especially to young players. What’s happening is that young players of all ages are taking this music up right now. So at this point the best place to get [our music] right now is at our “50 for the Future” site.

It takes on a life beyond what was even originally envisioned for it!

Yeah. And there’s some really amazing choreography being done to some of the “50 for the Future” pieces. I’m very happy about it. It’s taking on quite a dimension that I had no idea we’d be able to take.