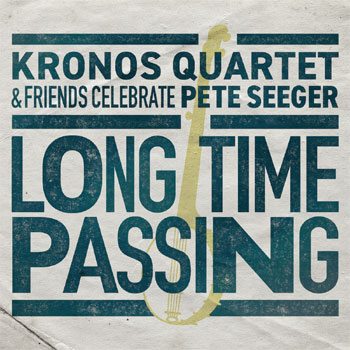 Ever since its inception in 1973, Kronos Quartet has been pushing the boundaries of music. The San Francisco-based ensemble has made a mission of finding unexplored connections between seemingly disparate musical forms, bridging the gaps between genres, and redefining musical categories. One of Kronos’ current projects is a new album celebrating the work and influence of another American musical icon, Pete Seeger. Long Time Passing: Kronos Quartet and Friends Celebrate Pete Seeger pays tribute to the singer, folklorist and social activist.

“I grew up hearing Pete Seeger’s performances and his music,” says Kronos Quartet violinist and founder David Harrington. “As did John [Sherba, violin] and Hank [Dutt, viola].” Harrington says that Kronos cellist Sunny Yang discovered Seeger’s work much later. “And now she has a 9-month-old child who has become a Pete Seeger fan!”

But the specific inspiration for the new album came about in an elementary school classroom, Harrington explains. “In May of 2018, we had just played a concert as part of our Kronos Festival,” he recalls. That performance included a piece featuring the voice of Clarence Jones, Martin Luther King Jr.’s speech writer, telling the story of the creation of the “I Have a Dream” speech. “And the only thing I could think of as an [fitting] encore after that piece was ‘We Shall Overcome,’” Harrington says.

A day or two later, Kronos gave its annual performance at Francis Scott Key Elementary, where Harrington’s daughter is a third grade teacher. Another class attended as well, and their teacher brought along his guitar. “We all did ‘We Shall Overcome,’” Harrington says. “And afterwards, Mark Rosenberg, the other teacher said, ‘You know, tomorrow is Pete Seeger’s 99th birthday!’” Immediately, Harrington knew that he wanted to record an entire album of songs written or popularized by Seeger. “So the idea for this album happened in Room 207 in the Sunset [District] of San Francisco, in my daughter’s third grade classroom,” he says.

The original plan was to complete Long Time Passing by May 2019, in time for the 100th anniversary of Seeger’s birth. “But it took us longer than a year to do the album,” Harrington says with a chuckle. “A lot longer.” The resulting 15-song album – on which Kronos Quartet’s instrumentation joins vocalists Sam Amidon, Maria Arnal, Brian Carpenter, Lee Knight, Aoife O’Donovan and San Francisco-based singer Meklit – is a lively and musically varied tribute that justifies the time it took to finish.

Working with vocalists is nothing new for Kronos Quartet. Over the years the group has collaborated with an eclectic variety of vocalists including Pran Nath, Tuvan throat singers, Dawn Upshaw, Laurie Anderson and others. They first recorded with Amidon – whose reading of “If I Had a Hammer” is a highlight of the new album – on the 2017 release Folk Songs.

Harrington makes the point that the human voice is the first instrument. “Singers carry their instruments within them,” he says. “The rest of us carry ours around with us.” And he emphasizes that many string players tend to listen to a lot of vocalists for inspiration. “It doesn’t feel outside the group at all to have a fifth member who’s a vocalist,” he says. “In fact, it kind of allows us a larger palette in our own playing. I feel that we become larger as players, as musicians.” 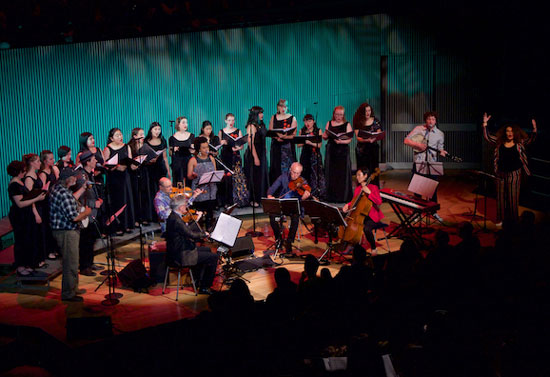 The traditional songs on Long Time Passing were originally written and played in the folk idiom. In Kronos Quartet’s hands, the music is both true to the original spirit and breathtakingly new. “When we were exploring the work of Seeger for this album, I listened to hundreds of songs and performances from all over the world,” Harrington says. “I felt re-inspired by his amazing reach, expressively and in terms of the material.”

And that inspiration gave Kronos Quartet and the vocal collaborators the freedom to interpret the music in their own ways. “The album was not the kind of thing where [we thought], ‘Oh, we need to sound like Seeger’ or anything like that,” Harrington says. He considers Pete Seeger’s version of “We Shall Overcome,” from the 1963 album of that name recorded at Carnegie Hall, a personal favorite. “But as much as I wanted our [version] to be as thrilling and inspiring as we possibly could make it, we had to find our own way,” he says. “The idea of having 100 third-grade kids joining us was the result of where the album started.”

Seeger’s original songs – “If I Had a Hammer,” “Where Have All the Flowers Gone?” among them – are distinctive, says Harrington. “And [Seeger] had a real gift for discovering iconic melodies from other places, too.” He relates the story of a pile of 78 rpm discs destined for the trash bin at the Library of Congress. Folklorist Alan Lomax rescued those records and gave them to Seeger, who discovered a little-known recording called “Mbube.” “He thought they were singing ‘wimoweh.’”

Harrington observes that it would be difficult to imagine our musical culture without that song. “But,” he says, “not everyone has that ability, like Pete Seeger did, to hear a melody and think, ‘That’s it!’” Seeger did the same thing when he popularized “Raghupati Raghav Raja Ram,” a Hindu devotional song.

The placement of “Raghupati” as the third track on Long Time Passing is very intentional. Harrington says that it simply had to follow “The President Sang Amazing Grace,” featuring Meklit. “The emotional impact of that song is such that [after hearing it,] an audience needs a place to just think and just be calm,” he says. “We could’ve done a whole album [solely] of music that Pete brought back into American music from other places,” Harrington says. “And it’s tempting.”

Due to the pandemic, Kronos Quartet is not currently touring. But recently, Kronos recorded many of the songs from the new album live onstage with a large assemblage of vocalists (including Meklit, L.A.’s Tonality chorus and others) at UCLA. The performance – part of the Tune In online festival – was broadcast from online.cap.ucla.edu October 28.