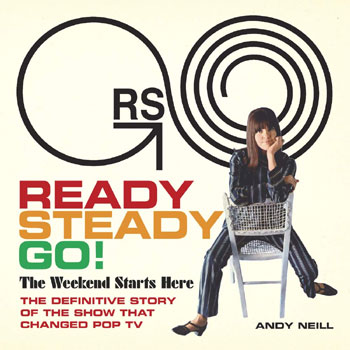 Launched a few years ago, BMG Books broke into the market with the excellent Hotter Than a Pepper Sprout, Billy Edd Wheeler’s lively memoir. Soon thereafter, the publisher began its RPM series in earnest; that series shines a light on the histories of important record label. Titles have included Gillian Gaar’s book on Sub Pop and Billy Vera’s history of Specialty Records. So in a relatively short span of time, BMG Books has established itself as the go-to source for new titles exploring music and the entertainment business.

But with all respect to the authors of those fine books, the publisher’s latest title is in many ways its most impressive to date. A substantial coffee table book, Andy Neill’s Ready Steady Go!: The Weekend Starts Here is a lavish – and more importantly, definitive – chronicle of the beloved British pop music program(me) of the ‘60s.

Across its 260-plus pages – inside a sturdy, colorful hard cover the exact size of a vinyl LP – Ready Steady Go! not only presents the show’s history through eye-popping color photos and sharp black-and-white ones, but Neill’s narrative places RSG’s story into the larger context of pop culture history. Like any good coffee-table tome, not a single page of Neill’s book is lacking in images. But the photos and graphics are perfectly balanced by text that is both exhaustive and highly readable. Neill’s episodic approach to his subject means that while one can read the book start to finish, it’s just as enjoyable (and enlightening) an experience to open to a random page and just start reading.

Extensive interviews – with presenters, crew, musical guests and so forth – make Ready Steady Go! much, much more than one man/fan’s take on the influential show. Even though its time on air (every Friday evening from August 1963 to late December ‘66) was somewhat brief, RSG left a lasting impression on a generation of viewers.

Other shows of its era – Juke Box Jury, Countdown, Top of the Pops and Thank Your Lucky Stars – all had their time, but RSG stood (and stands) head and shoulders above the rest. It was a rite of passage for pop acts of the era to appear on the show, and a list of artists showcased on the program could fill .. well, a bunch of pages. Helpfully, Neill has compiled just such a list: the book includes a complete episode guide, noting broadcast date and times, director, guests (and songs performed) as well as episode trivia.

Even more notably, Neill indicates for each whether each episode survives today in complete or partial form. Sadly, only one – one! – episode from 1963 survives in any form, so we’ll likely never get to see clips of Johnny Kidd and the Pirates’ appearance, nor clips of pop groups singing songs written for (or given to) them by John Lennon and Paul McCartney: Tommy Quickly (“Tip of My Tongue”), The Fourmost (“Hello Little Girl”) and so on.

But rather than focus on what we don’t have, there’s great reason to celebrate Andy Neill’s monumental work, one that helps enshrine the importance of Ready Steady Go! in a format that can be enjoyed by generations to come.

Nota bene: While Dave Clark (of the eponymous Five) acquired the rights to what does remain of the actual RSG video archive in the 1980s, he never did much with it. In 2018, BMG Rights Management acquired ancillary rights to the archive; doubtless that paved the way for the access to (and inclusion of) the thousands of images that adorn Andy Neill’s book. While ancillary rights aren’t the same as access to the moving images themselves, it might not be too much to hope that BMG might do something Blu-Ray-ish with the Ready Steady Go! video archive. That would be something.