In the history of pop music, there are few tales stranger – and more inexplicable – than that of Elva Miller. In this postmodern era, the idea of so-bad-it’s-good has long since taken hold, so films like Plan Nine From Outer Space are looked upon as bent classics of a sort. And on the music side, the Shaggs’ Philosophy of the World shares a similarly exalted place, at least in the mind of some listeners. (Though it’s hard to tell for certain if said fans are being arch or serious.) But 40-plus year ago, camp wasn’t quite the mainstream commodity it is today. (Though that would soon change: Eternal thanks, Batman.)

Yet none of that can explain away the fact that Mrs. Miller (as she would be known) landed a recording contract. Discovered by deejay Gary Owens (later of Laugh-In fame), this sixtyish woman’s particular set of, er, talents would be displayed on radio as early as 1960. But by 1965 she had a deal with Capitol Records, American home to the Beach Boys and the Beatles.

If you’ve never heard Mrs. Miller, at this point you may be wondering what exactly makes all this so mystifying. But that’s the thing: you’ve got to hear her. Miller sang in a relentless vibrato style, with little if any regard to tempo, a – shall we say – on-and-off relationship with melody, and a predilection for whistling whenever she felt a solo might be warranted. To call her musical presentation amateurish is to offend amateurs. 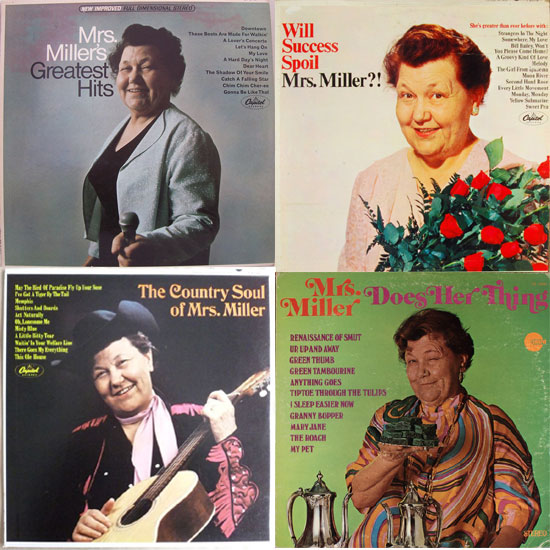 Other Mrs. Miller Titles You May Have Missed
(Hey kids! Collect ’em all!)

Had Mrs. Miller only cut a single, the joke would have been the joke, and that would have been that. But when her recorded debut, the perversely (and misleadingly) titled Mrs. Miller’s Greatest Hits, stormed the album charts to the #15 spot in 1966, music had entered Bizarro World. Her debut single, a cover of Petula Clark’s “Downtown” is an exemplar of her, er, style. It reached #82 on Billboard’s singles chart. Miller appeared on Hollywood Palace (crooning with no less a figure than Jimmy Durante!), sang at the Hollywood Bowl and even entertained(!) American troops serving in Vietnam(!!)

If all that wasn’t strange enough, Miller’s recording career continued unabated for a few more years. She released three(!!!) more albums — though not all on Capitol – before fading into obscurity. Years later when Rhino Records released its World’s Worst Records series, it had the good sense to feature Miller’s “Downtown” right alongside “Teenage Enema Nurses in Bondage” by Killer Pussy and the inspirational “Troggs Tapes.” Miller passed away in 1997 at the age of 89. That might have been the end to an odd story. Alas, it was not. 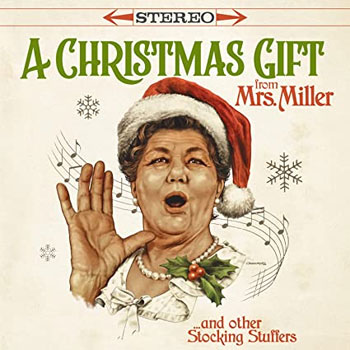 Recently the intrepid souls at Ship to Shore Media – home to rarities reissues by Tiny Tim, Paul Williams and others – discovered a cache of previously-unreleased recordings by the estimable Elva Miller. Perhaps these sessions were deemed not good enough for release back in the ’60s? Once can only wonder. As luck would have it, in this disaster of a year, it somehow seems fitting that we now have a previously unheard Christmas album from Mrs. Miller. A Christmas Gift from Mrs. Miller & Other Stocking Stuffers features our gal warbling soon-to-be-classic readings of “Rudolph the Red-Nosed Reindeer,” Silent Night,” “Santa Claus is Coming to Town” and five others.

But wait! There’s more! A Christmas Gift from Mrs. Miller is a record for all seasons. The album includes nearly a dozen additional tracks, including the special-occasion tune “Happy Birthday” (though it’s dedicated to Owens) and a reading of Meredith Willson’s “Till There Was You,” originally heard in The Music Man. With its funeral parlor organ accompaniment, Miller’s cover will make you forget Shirley Jones and that McCartney fella. And “I Left My Heart in San Francisco” will do the same regarding Tony Bennett. Even more bizarrely, A Christmas Gift from Mrs. Miller features “She Had to Go and Lose it at the Astor,” with an arrangement worthy of Tommy Dorsey-era Frank Sinatra.

Making this curio even curiouser, the compilers have seen fit in many cases to include studio chatter, so listeners can thrill to the sounds of the recording engineer patiently guiding Mrs. Miller through multiple breakdowns before she, er, nails the take.

Appropriately enough, A Christmas Gift from Mrs. Miller is a vinyl-only release. Buy it for someone you love this holiday season.