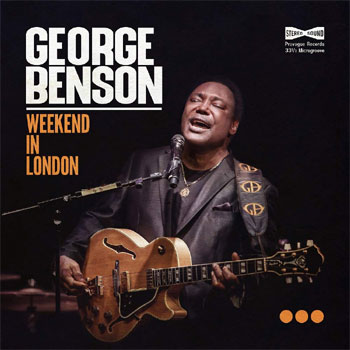 As the emcee tells us right up front, this recording marks the first time George Benson appeared onstage at Ronnie Scott’s in some 45 years. In the interim he has built upon the success of 1976’s breakthrough Breezin’, following it up with more than 20 studio albums, countless tours, and the launch of a GB Signature guitar series from Ibanez. The NEA awarded him its highest honor, Jazz Master, in 2009. Along the way, he found the time to play on the recordings of many other artists, including – most unusually and notably – Gorillaz’s 2018 single, “Humility.”

Weekend in London certainly isn’t Benson’s first live album, but it is his first since 2007’s Live from Montreux (recorded in 1986). And his London set includes some of the songs one would expect: “Give Me the Night,” “Turn Your Love Around,” “Love X Love” and so on. It’s something of a return to (or continuation of, if you prefer) classic form, with Benson alternating between his relentlessly melodic and fluid guitar playing and his assured, cool vocal work.

The package notes credit three “additional” backing vocalists; it’s not clear if that trio was part of the Ronnie Scott’s performance or post-show studio sweetening, but the mention of “additional recording” in an Arizona studio suggests it’s likely. No matter: any fixes that were added don’t take away from the live feel of the recording.

Benson has long since passed the point where jazz purists carping about his departure from his soul jazz roots makes any difference. He found his biggest (commercial) success once he started singing and moved toward a more pop-oriented style, and that all happened well more than four decades ago. Weekend in London celebrates that musical pivot, and for fans of the style, it’s a tasty treat indeed.