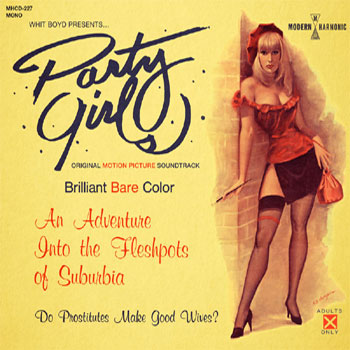 Admittedly, it requires a certain kind of sense of humor to appreciate such a thing, but as fate would have it, I’m just such a person. So as out-there as the context might be, I now count myself as a fan of what has been (somewhat arbitrarily) dubbed the Whit Boyd Combo.

The intrepid folks at Modern Harmonic managed to lay hands (heh) on the reels containing the Party Girls soundtrack, found “in an abandoned shed.” Oddly enough, if one takes the tale at facial value (sorry), what they didn’t manage to locate was the film itself. In fact, they’d have us believe, they couldn’t even find anyone who would admit to having ever seen Party Girls.

So the curators of this set decided to call ‘em the Whit Boyd Combo. Fair enough. And the music’s pretty good. The archivists also located an audio tape of a stentorian announcer teasing the film: “Married for appearances sake … but definite lesbian tendencies …” and so on. Those same intrepid archivists thought that rap too good to go to waste, so they overlaid it with some of the instrumental backing to create “Don’t Miss Party Girls.” Not exactly SFW but funny as hell.

A cover of James Brown’s “I Got the Feelin’” appears in abbreviated form on the LP; the by-definition-less-fun CD version has the uncut (ha!) recording. Liner note author Lisa Petrucci has fun with the whole affair, referring to the nameless vocalist on the track as the “Stepfather of Soul.”

The entirety of Side Two is given over to “Party Scene / Strip Poker.” Wildly honking sax and mixed-out-front bass spar with the other musician, relentlessly playing with his organ. The music ebbs and flows, and while it’s little more than a jam, it’s an appealing one. The drummer in particular isn’t content to stick to one beat the entire time; he inventively changes things up, and his band mates have the good sense and musical dexterity to follow him. 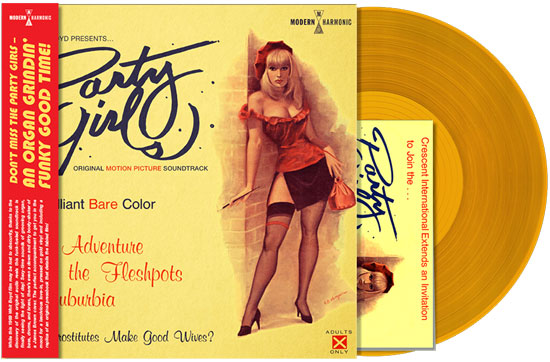 That this even exists is amusing enough. That a label saw fit to release it in 2020 is even more so. That it’s worth your time is yet more of a surprise. But indeed it is. And it’s a hoot.

To reiterate: the film itself is lost in the mists of time and sticky, darkened movie houses. But the promotional materials – a booklet and still photos – were found, and a facsimile thereof is included for your perusal. And if you go online – hey, look: you’re online now! – you can watch a trailer for the fine motion picture. But trust me: the soundtrack is better. Y’know that old adage, “I only buy Playboy for the articles”? Well, tell ‘em you’re only interested in Party Girls for the soundtrack.