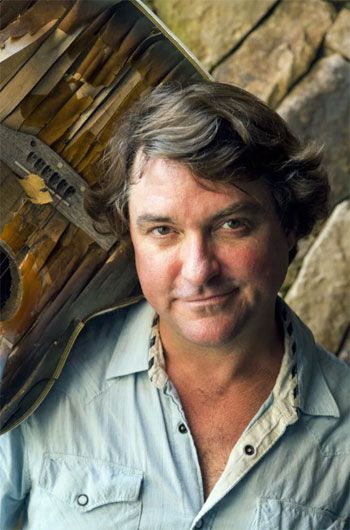 This featured appeared previously in the December 2019 issue of Bold Life Magazine. — bk

Keller Williams can do it all, and he’s astoundingly productive. The Virginia-based multi-genre guitarist has long been a fixture on the Western North Carolina music circuit; fans love the music on his more than dozen albums. Making music using looping technology, he can work alone if he chooses, and he often does. But nearly as frequently he teams up with talented friends and associates like Larry and Jenny Keel, Jeff Austin, the String Cheese Incident, the Travelin’ McCourys and others. In late 2019 he was readying two more albums for release, and scheduled live dates with longtime collaborators Jeff Sipe and Gibb Droll.

For you, what are the primary benefits of playing with other musicians in a live setting?

The primary benefit is creating something bigger than you can do by yourself. Musicians have their own minds. Playing with other musicians was the goal from the beginning for me: to collaborate, share this camaraderie onstage, communicate without language. There’s just way more benefit to playing with other people than playing alone.

You’re primarily known as a guitarist. But you’re not playing guitar on this date with Jeff and Gibb, are you?

Right. It’s going to be the three of us, and I’m going to be playing bass. We have a lot of material that we’ve played together over the years, including a double live record. We’re really going to be having a good time and act up. There’s going to be a lot of improvisation as well, I’m feeling.

You’ve said that you’re “a music lover first and a songwriter second.” From your perspective, what makes a song worthy of covering?

If it’s something that entertains me. If it’s not going anywhere in my mind unless I put my own spin on it. Staying true to the song is very important, but putting my own spin on it is a way to keep me entertained. David Lindley says that if you get a song stuck in your head, all you’ve got to do is play it backwards in your head and it should cancel it out. Yeah, that doesn’t work at all for me. I have to actually grab a hold of it, learn it, put my spin on it, and play it several times in public before it gets out of my head.

Outside of music, what influences you as an artist?

Some comedians. Word structure, build ups and punchlines and things like that; it all kind of wraps into one. You call them jokes, but really, comedians are just telling these elaborate stories with funny anecdotes, and the stories come back around full circle, One of my most recent influences, I think, is SiriusXM and its several comedy channels. I spend a lot of time in vehicles, and on late night drives, it’s fun to get away from loud, pumping driving music and listening to some funny stories.

You’ve got a whole bunch of solo albums. When you look back at songs that you wrote 25 years or more ago, do you recognize the person that wrote them?

I definitely have forgotten many songs that I’ve written 25 years ago, but once I can hear it once, I can easily grab onto it and kind of bring it right back. They’re not completely gone out of my memory. I just need some little things to trigger it. But I still remember a lot of the contents. The love songs I wrote were strictly for one person, and she’s still in my life.

Do you “road test” songs before committing them to a recording?

if someone decides to google you, unless they add the word music after your name, they get the real estate broker instead. How much of a challenge is that for you?

After a few drinks, I am Keller Williams Realty! What I do, Bill, is I move into the town, set it up and gather the locals, then I step away and I take 8%. That’s how I afford my rock and roll lifestyle.

No, [Keller Williams Realty] came to the East Coast in about ‘95, ‘96. And at that time, I was playing Virginia Beach twice a week, Fredericksburg once a week and Richmond once a week, and trying to get down in the Carolinas on the weekend to open for bands and stuff.

And those Virginia Beach gigs, they were like Tuesdays, Wednesdays in these little bars. And people would pull up signs out of the ground and bring them to the gig and put them onstage with the mud still on the stakes and stuff. And I got an actual letter in the mail with the Keller Williams Realty font up in the left hand corner asking me to … not a cease and desist, just a simple little, “Would you be so kind to ask your people that come to your shows to stop pulling up our signs? We’d really appreciate it.”

Of course, I didn’t ever say anything, but my mother wrote them back and bitched them out a little bit about they should be hiring me for all their corporate events. And of course, we never heard back from that.