One from the Archives: Jamie Laval’s Celtic Christmas

2020 has been an unusual year .. to put it mildly. Pretty much nothing anywhere has gone as planned. Normally, by this time of year we’d all be gearing up for holiday festivities that include live music. But 2020 isn’t proving to be that kind of year. So here’s a feature — never before published on Musoscribe — from this time last year, a time when things seemed so much simpler. — bk

For several years now, acclaimed Celtic fiddler Jamie Laval has compiled a special Christmas show. The globetrotting Tryon-based musician makes a point of changing the performance every year, so even if one has seen one or more previous holiday programs, attending the newest edition of Jamie Laval’s Celtic Christmas will always be a unique and rewarding experience.

This year’s program is no exception. What the show has in common with its predecessors is that it’s informed by Laval’s musical travels of the past year. In the summer of 2019, Laval was on the faculty of two fiddle camps. One was led by his fellow fiddler Mark O’Connor; the other was the Boston Harbor Scottish Fiddle Camp. And Jamie Laval brought – and took away – something special from each. 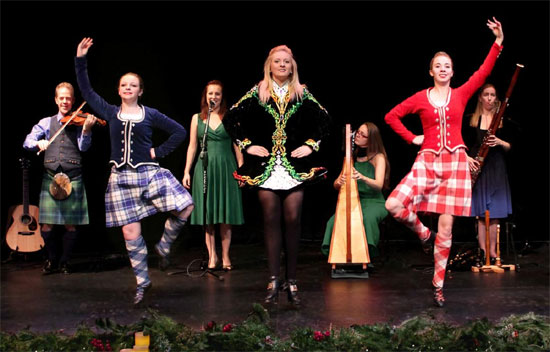 Laval explains that O’Connor’s approach is “to champion American style folk music rather than falling back on the European model.” And Laval applied his Celtic grounding to that context, creating a richer experience for the students.

The Boston Harbor program found Laval in nearly the opposite situation. “I was the only American teacher,” he says. “All the others were Scottish.” So Laval brought an American perspective to the proceedings.

What he took away from both was a renewed appreciation for the passion and potential of young musicians. “Something about the fiddle camp environment just draws these remarkable, special people who are really perceptive about music and about life, very motivated for learning and for all things, and just so genuine and good people,” he says. “It was just really heartwarming.”

And heartwarming is a word that applies to Laval’s Christmas program. Always focused on presenting something beyond the ordinary, Laval laughs when he says, “We’re not ever going to do ‘Frosty the Snowman’ or anything commercial.” Instead, Laval draws from ancient traditions that celebrate not only the Christian holiday but observe the changing of the seasons, Solstice and the renewal represented by the ringing in of the new year.

Laval’s program is steeped in Celtic culture, something that has both a wide appeal and a special resonance in the land of Appalachia. And tradition is seamlessly combined with modern touches. “We’ve got this ancient music and we’ve got poems that talk about the changing seasons and about nature; there’s this idea of a throwback to days of old,” he says. “And we’ve got really special instrumentation.” This year Laval is joined by five performers including a Celtic harpist and Eamon Sefton, a musician he describes as “a monster guitarist from Boston.”

The program has a vivid multimedia component as well. One musical number has as its backdrop the Standing Stones of Callanish, an cruciform stone arrangement in Scotland’s Outer Hebrides that dates to the Bronze Age. The images “take us back to the early Celtic peoples, to village life when things were simpler, families and communities were tighter,” Laval says. It might seem paradoxical, but he believes that his program “achieves a cozy and inviting atmosphere using more technology.” Three members of Laval’s team are situated backstage to make all of the multimedia effects work smoothly, leaving the onstage performers to dazzle the audience with song and dance.

Laval’s programs entertain and educate. Ultimately, though, the goal is to involve the the audience in the experience of having a good time. The fiddler promises that Jamie Laval’s Celtic Christmas will make attendees “want to just squirm around in their seats, get up and dance and party!”