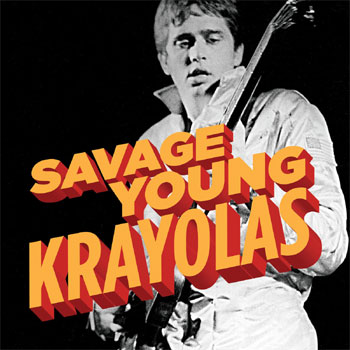 In the shady corners of rock’s history, there have been more than a few retro purveyors who managed to breathe new life into well-trodden styles. Occasionally, they’ve done more than bubbled under commercially: Sha Na Na and the Stray Cats are among the comparatively few who broke out in a big way.

More common – but no less worthy – have been bands like the Kaisers, the Scottish group launched in the ‘80s sounding like pre-Please Please Me beat music but with original songs. If the Kaisers have a stateside equivalent, it might well be Texas-based Krayolas. No relation at all to the Red Krayola (also from Texas, as it happens), the Krayolas burst on the scene in the ‘70s with their own brand of punky rock ‘n’ roll. Their sound wasn’t miles away from that of the 101ers, a nominally “pub rock” band operating around the same time in England, and featuring a young Joe Strummer.

But central to the Krayolas’ aesthetic was some truly regional character: the band effortlessly folded in elements of Tex-Mex to its original songs. The band never hit the majors, but released a string of superb albums that continues to modern day (their most recent release of new material seems to be Tormenta from 2013).

There’s relatively little documentation available on the group, and much of what does exist seems drawn from the same sources. But what is known is that in 2007 the group released an archival collection, Best Riffs Only, on its own label. That CD brought together early demos and finished recordings, documenting an embryonic – yet on hearing, fully-formed – band years before its official debut, 1982’s Kolored Music.

Now in late-late 2020 comes Savage Young Krayolas. Borrowing a title from one used on a collection of Hamburg-era Beatles recordings makes perfect sense, as this set represents another look into the Texas band’s earliest days. It’s not clear how much of Savage Young Krayolas overlaps with the out-of-print Best Riffs Only – probably a good bit – but the sound quality is excellent, and the album tracks are annotated this time around.

Savage Young Krayolas is all original material save a cover of the Kinks’ “You Really Got Me.” And while it’s true that most every garage rock band has played that tune, the Krayolas’ take slyly connects some dots that let keen listeners know they’re students of rock. Midway through the song, they chant “stronger than dirt” over the signature riff. That phrase, of course — with the same two-note melodic progression – was part of a ‘60s jingle for Ajax household cleaner. And it was referenced at the tail-end of the Doors’ “Touch Me,” a song that lifted part of the melody from the jingle and/or the Kinks song. (The theft/borrowing was more subtle than “Hello, I Love You,” but that’s another story.)

But it’s the band-penned music that makes Savage Young Krayolas most worth hearing. The group — then a pseudonymous trio of Sal Dana, Jet Bass and Freddie Herman — tears through its moody rockers with relish. The songs draw from the same well of inspiration that fired bands like Chocolate Watchband, but with a Beatles-influenced vocal harmony approach that elevates the music beyond standard-issue garage rock fare. “Cry Cry Laugh Laugh” is as perfect a rocker as you’ll ever hear.

The combo organ that figures into much of the Krayolas’ songs is expertly employed, though the songs on Savage Young Krayolas don’t emphatically showcase the regional flavor of the band’s later material. Instead, there’s the Merseybeat character – with peppy handclaps – of tunes like “All I Do is Cry.” It’s an irresistible track, one that I’ll wager Steve Stoeckel and Jamie Hoover wish they had written.

And like the Spongetones, the Krayolas crank out this retro-styled music in a manner so authentic that there’s not a whiff of artifice about it. Sure, “I Just Wanna” (with guest keyboardist Augie Meyers!) employs any number of familiar riffs and melodic progressions, but they’re combined in such a way that you haven’t heard them before. And while “Alamo Dragway” will remind listeners of Los Straitjackets, it too is fresh and new in its own way. “Sunny Sunny Day” has jaw-dropping vocal harmonies that invite inevitable comparisons to the Beach Boys.

To listeners new to the Krayolas – like this reviewer – as each track rolls off of Savage Young Krayolas, it’s stunning just how high quality and irresistible this music is. You, too, many find yourself wondering, “Why haven’t I heard these guys before?”