Ragland’s facility is set up to provide full, turnkey service. Some tasks are subcontracted – sleeve printing, and electroplating (the latter to be done at top-rated companies like Nashville’s Welcome to 1979 Industries) – but Citizen Vinyl customers have a single point of contact. “We’ll be the first person that they upload their source materials to, and then their packaged records will be picked up and shipped from here,” he says.

And Citizen Vinyl can take on even very small jobs. “The minimum [run] that we’re going to offer is 300 units,” Ragland says. As with any vinyl pressing project, fixed costs – making of the stampers, lathe cutting and so on – make the customer’s per-unit costs prohibitive below that level. 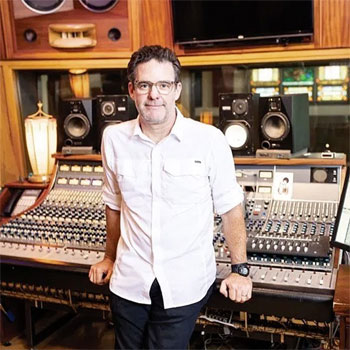 Ragland emphasizes that Citizen Vinyl is a home-grown operation, one that leverages Asheville’s well-deserved reputation as a music and culture hot spot. “We’re not borrowing any money,” he says, characterizing the investor team as “all local money that wants us to see us create an institution.”

The new Citizen Vinyl facility is spacious and unique. The impressive edifice was built in 1939 as the home of the mountain city’s two daily newspapers, Asheville Citizen and Asheville Times. The papers combined in 1991, and scaling back by parent company Gannett means that today only a handful of newspaper staffers have offices on the second floor of the building. (Printing was moved out-of-state in 2009).

That means that Citizen Vinyl has a large, open and bright space on the main floor for the bar, dining, performance stage, record store and DJ booth. A massive window on one side of the common area puts the printing press on real-time display for visitors. And everything about the space is centered around vinyl. For example, two turntables are set up behind the bar, and each day, bartenders are given a curated stack of LPs to play. The selections are relevant to the day. “Maybe it’s the anniversary of Abbey Road’s release,” Ragland suggests, or possibly the birthday of jazz great Nina Simone, born in nearby Tryon, N.C.

Because of Asheville’s compact size and walkabilty, and thanks to Citizen Vinyl’s strategic location downtown, many of the city’s top music venues are a short walk or quick drive away. The Thomas Wolfe Auditorium, The Orange Peel and The Grey Eagle are just three of several music venues situated within a mile of Ragland’s new facility. That means that in-store events – live sessions, record signings and curated album discussions – can seamlessly figure into the schedules of both Citizen Vinyl and touring music artists.

The building’s third floor is home to Studios A and B of Citizen Studios; they began operation while renovation and construction on the manufacturing and retail areas were still going on downstairs. As it happens, Studio A was originally the home of WWNC-AM, a station that at its peak was rivaled in technology quality only by New York City’s RCA Studios. Mastering Engineer Ryan Schilling recently acquired a fully restored Neumann VMS-66 lathe that he’ll use in Citizen’s mastering suite, also on the third floor.

Ragland has definite ideas about what’s fueling the long player’s resurgence. “The CD doesn’t offer the visual, tactile, physical artwork element that is so appealing to record enthusiasts,” he says. “And streaming – now with high-res, 96kHz 24-bit WAVs you can download – has made CDs fairly redundant.” And those facts have driven the popularity of vinyl. “The record album is multi-sensory, tactile and experiential,” he says.

Playing vinyl is interactive; the listener has to get up after 22 minutes or so and flip the disc over. “And some of us need that,” Ragland says. “I think it’s part of a larger cultural trend based on digital fatigue; we need to slow down.” The vinyl listening experience encourages that. He describes the scene: “You’ve got your turntable, you pour yourself your favorite beverage, and you turn your phone off, and you’re like, ‘You know what? I’m just going to be in the moment. I’m going to sit down, put this record on and open the gatefold [record sleeve] on my lap and I’m going to read. I’m going to connect with this band.’” With records, Ragland believes, “you can do all that at a much deeper level than you can with streaming.”

And then there’s the appeal of vinyl as an expression of one’s lifestyle. A listener might discover new music via Spotify, Amazon Music or another streaming medium. “You can sample the music, and if you want to take that experience – that love of what you’re listening to, and the intrigue you have with the musicians who are creating it – to the next level, there are two things you can really do,” Ragland suggests.

“You can go to the shows, and have that magical, special in-person experience. And you can buy a record, which is the next step in the engagement spectrum. You think, ‘Oh, I love that Phoebe Bridgers album. It’s really great. I like it so much that I want to buy a record. I want to put it on my shelf in my apartment. It is a part of my identity. I am associating myself with that.’” The vinyl record is an artifact, something with which the listener can associate his or her identity. “That’s why I like it as a musical choice,” Ragland says. 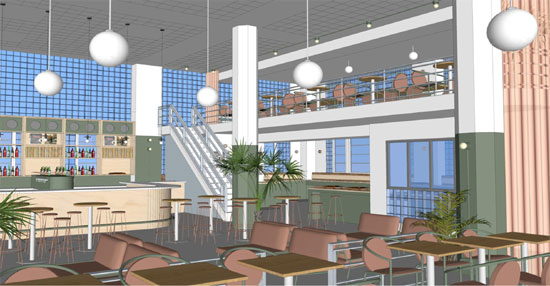 From a more practical business perspective, Ragland is betting on vinyl’s staying power in the marketplace. “It will be the preferred physical format for the foreseeable future,” he believes. “Maybe there’s going to be something that will be developed that will be [superior], but vinyl has been around for 80-plus years. It doesn’t seem like it’s going away.” He notes that even in the midst of a worldwide pandemic, year-to date sales of vinyl are up 11 percent compared to last year.

“I’m extremely confident about Peter’s ability to operate the presses to make really great sounding records,” says Citizen Vinyl’s CEO. “And I have confidence in our ability to deliver a fantastic venue, bar, restaurant and record store.

“I get more excited about it every day,” Ragland says. “After burning 12 hours in the studio, I walk out through the main floor on my way out to my car. And I give myself a few minutes’ quiet time alone. And it’s like, ‘How did this happen?’ There’s been some magic. I just show up, take things one day at a time, and make myself available to that magic. And I do whatever I can to help keep the thing moving forward.”