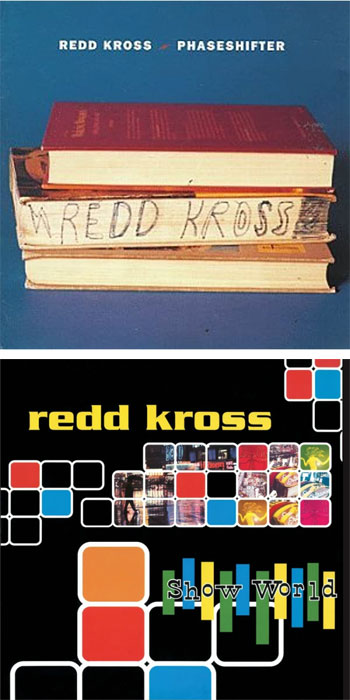 Over the span of a decade-plus, Hawthorne, California band Redd Kross navigated the tricky path from punky indie band to one that sounded like the epitome of arena rock. And they managed the metamorphosis in a way that kept their bratty, pop culture perspective intact. In fact the change to a more radio-friendly sound served to sharpen the band’s music, and its knowing take on rock forms proved once again that to properly satirize and/or pastiche something, you have to really understand and appreciate it.

Redd Kross may have seemed to hit its peak with 1990’s Third Eye, a mix of sticky-sweet bubblegum (“Bubblegum Factory”), soaring guitar rock (“The Faith Healer”) and spot-on re-creation of ‘70s rock (“1976”). But critical acclaim didn’t bring with it a corresponding commercial breakthrough, so by the time of 1993’s Phaseshifter, the group was off Atlantic and back on a pseudo-indie Polygram subsidiary label.

A seeming return to the indie scene didn’t blunt Redd Kross’s creative momentum, though. While the clever humor of Third Eye is dialed back, Phaseshifter maintains both the finely-tuned arrangements, soaring harmonies, and stadium-size guitar riffage that made the band’s previous album so effective.

So-called grunge rock was reaching its peak around the time of Phaseshifter. Redd Kross have it both ways on their fourth full-length album: the power and energy of grunge is displayed on tracks like “Monolith” and “Visionary,” but the pure pop perspective of leaders Steven and Jeff McDonald ensures that there’s a strong emphasis on melody. So while “Jimmy’s Fantasy” rocks in thunderous fashion, it also sports a winning, indelible melody.

Redd Kross’ “Saragon” is a sly, knowing wink at the Beatles’ early releases on Capitol Records: the vocals are panned to one speaker, the instruments to the other. But the gimmick doesn’t take away from the song’s virtues as a solid, catchy rocker. And the closing track, “After School Special” combines the group’s trademark nostalgia with punk energy.

Phaseshifter repeated its predecessor’s critical acclaim, and somewhat unexpectedly performed well on the charts in the UK and Australia. That, it seemed, was enough to rekindle interest from the majors: by the time of 1997’s Show World, the band was back on a major label.

The same lineup that made Phase Shifter – the McDonalds, keyboardist Gere Fennelly, guitarist Eddie Kurdziel and drummer Brian Reitzell – return for Show World. All of the previous album’s virtues are on brilliant display here as well. Belying its title, “One Chord Progression” is a memorable melodic rocker that’s representative of this consistently enjoyable record. “Follow the Leader” channels the T. Rex sound into a ‘90s vibe.

From the driving power pop riffage of “Pretty Please Me” to the anthemic rock (with gurgling synthesizers) of “Stoned” to the power balladeering of “Girl God” to the shimmering pop of “Mess Around,” Show World is the third in what can be thought of as a Redd Kross trilogy of albums that bring all of its best qualities into sharp focus.