Home  »  classical • interview   »   Sing Along with the Society

Sing Along with the Society 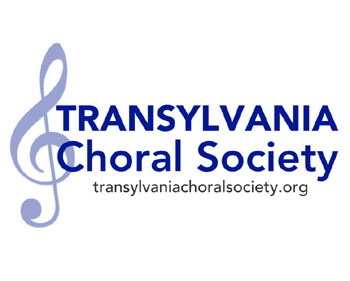 This feature appeared previously in the (pre-pandemic) December 2019 issue of Bold Life.

In the early years of the 20th century, New York City socialite Florence Foster Jennings earned a reputation as the world’s worst opera singer. Her lack of talent was matched only by her lack of self awareness. But she was an outlier; most people can carry a tune. And those who can’t readily acknowledge the fact.

Even though it’s open to – and enthusiastically encourages the participation of – anyone in Transylvania County, the Transylvania Choral Society doesn’t have any of those sort of problems. The nature of the ensemble’s work is very much in a spirit of camaraderie. “While we may not have perfect voices consistently, nobody sticks out,” says Irene Timmins, one of the society’s alto vocalists. “It comes together to make a pretty good sound.”

There are no auditions; those interested can come to a few rehearsals before committing. Those who stick around are guaranteed a fun time, and the chance to be part of something very special. Since 1975 the society has put together stirring programs for their annual Spring and Fall performances. And this Fall’s show is no exception. On December 12, the Transylvania Choral Society will present “Christmas Oratorio,” the North American premiere of a newly commissioned work by celebrated English composer Bob Chilcott.

Chilcott’s previous works have been performed by accomplished ensembles such as the New Zealand Youth Choir, the BBC Singers, and the Oxford Bach Choir with the Royal Philharmonic Orchestra. But there’s an everyman quality to much of Chilcott’s work, one that lends itself to performance by part-time singers who get involved in music for the pure enjoyment of it.

That’s especially true with regard to his new “Christmas Oratorio,” Timmins believes. “Bob Chilcott has deliberately made it that way,” she says. “He’s got four hymns in there with words that everybody knows, but to his new music. It’s very accessible.” She quotes a recent print review of Chilcott’s piece: “’He gave us another earworm tune.’ So, the melodies are easy to pick up.”

The society’s efforts continue to draw new members each year. Numbering about 80 vocalists in all – sopranos, altos, basses and tenors – the vocal group under the direction of conduction Dr. David Gresham “has had about 20 to 22 new people join this season,” Timmins says.

Past TCS productions have included the Lord Nelson “Mass,” Christmas “Midnight Mass” of Charpentier, Vivaldi’s “Gloria,” holiday carols from African and Spanish traditions, and even selections from South Pacific. And even for those who don’t choose to join the Choral Society onstage, there will still be an opportunity to get involved in the music. “We will have a little rehearsal of the four hymns in the work with the audience at the beginning,” Timmins says. “A little run-through just to familiarize them.” So shy concertgoers can still join in the musical fun from the safety of their seats.

However one does it, there are countless therapeutic benefits of singing, Timmins emphasizes. “Singing actually boosts your immune system, and there are studies showing that immunoglobulin is higher after rehearsal.” She notes that it’s important to stand up straight to project one’s voice properly. “So it improves your posture, too.” Add to that the social benefits of getting together with others looking for a fun and creative outlet, and it all adds up to a great time.

While the Transylvania Choral Society is readying for the “Christmas Oratorio,” it’s already planning the next performance. The April 2020 program, “As Memories Fade” will feature stirring works including Robert S. Cohen’s “Alzheimer Stories.” That’s in keeping with the proven benefits of singing as well, Timmins points out. “It’s very good for mental alertness, concentration and memory,” she says.