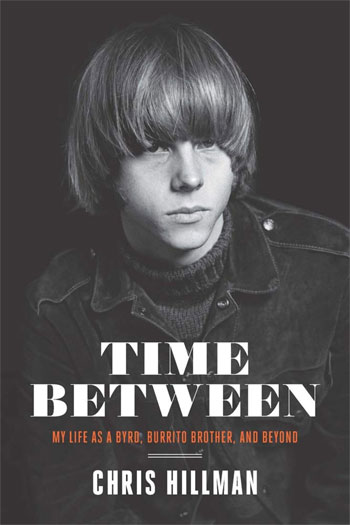 Musician memoirs/autobiographies are a decidedly mixed bag. Even when an artist is known for his or her songwriting wordsmith skills, that’s not a truly reliable indicator that said artist can write a compelling, worthwhile long-form narrative. Many enlist co- or ghost-writers, and – when they’re chosen carefully – that approach can compensate for any shortcomings. So when one encounters a well-written memoir from a recognized music figure, it’s a special bonus.

That’s the case with Time Between: My Life as a Byrd, Burrito Brother, and Beyond. Multi-instrumentalist Chris Hillman has an interesting story to tell, and his book is a well-paced, revealing read. From his (comparatively) privileged beginnings to family tragedy to his musical journey, Hillman charts a readable course through it all.

Hillman doesn’t shy away from recounting difficult, emotionally wrought memories. And his telling of his story deftly balances fact and feeling, allowing the reader to understand not only what happened, but how it affected Hillman. Readers looking for details about recording sessions and the inner workings of the record industry won’t come away from Time Between with a great amount of new knowledge, but one gets the sense that that has more to do with Hillman’s level of interest in those particulars.

Hillman’s fraught relationship with Gram Parsons is given a good amount of space; he expresses his deep admiration for Parsons’ talent butmakes it clear that said talent only got him so far. Hillman is diplomatic in his discussion of his former band mates, but – thankfully – never to the point of over-sanitizing things.

As significant as the Byrds were, it’s the period during which Hillman was involved with pioneering country rockers the Flying Burrito Brothers that provides the most fascinating and engrossing content in his book. And while his recounting of his later life and work – a period marked by a religious awakening – may not be of as much general interest as his Byrds/Burritos period, it’s handled in a very readable manner that helps paint a fuller portrait of Hillman as a human being.