You’ve said – only half joking, I’d guess — that the main goal of the San Francisco Radical Lab was attracting women.

Well, it wasn’t much more than that. And I came up with the name “San Francisco Radical Laboratories.” At the time, one of the things that I was doing was working with the Haight Ashbury Switchboard. You know, this was the time of peace and love and sharing. It was a marvelous feeling of openness and newness, et cetera, so then everyone was sharing things, and I tried to create a thing called Open Systems. Basically, library sharing, the precursor of the web, I think, on some unconscious level. The San Francisco Radical Laboratory, I thought, was a great name because it was, kind of, tongue-in-cheek. And yet, we were pretty radical, as far as we were concerned.

Then, Bruce Hatch decided to write a letter to President Richard Nixon extolling the virtues of electronic music. About six weeks later, the FBI came and said, “What the hell is going on here?” 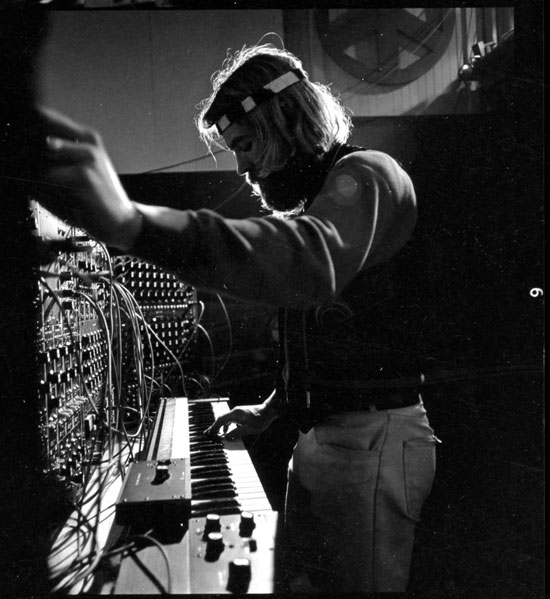 You met Robert Moog around that time; tell me about that.

Well, one of the sidebars of our circumstance was that we, pretty much, all smoked marijuana. We’d just purchased a kilo of rather bad marijuana from Mexico, and we were pretty much finished with cleaning it, and we had this pyramid of dope in the middle of the big table in our conference room.

We knew Bob Moog was in town and that he was going to visit us at some point, but he just showed up. He walked in the door and there we are, surrounding a pyramid of marijuana and stuff all over the table. We just stop, with our mouths open, because we know who this is. He looks at us, and we look at him. Then, a big smile breaks out on his face, and he says, “Well, I hope you’re going to save some of that for me!” That was very sweet. He was just a sweetheart, a remarkable fella.

How do you think that your early work on these modular synthesizers informed your later work in scoring for film and similar projects?

Well, once the instrument disappeared in ‘72, I had the library of tapes, and I started creating music for film and television using those tapes. I used a lot of the synthesizer stuff in the movies because there wasn’t much to use other than the tapes that I had. The Minimoog didn’t get developed until 1971, and polyphonic synthesizers really didn’t come into being until later.

Synthesizer technology has obviously moved on in a whole lot of ways and directions from those early days. And after years in the wilderness when digital technology seemed to reign supreme, now analog synthesis is in the midst of a very healthy resurgence. Against that backdrop, to my ears this San Francisco Moog album seems timeless. Whereas, I think, if it had come out 20 years ago, it might have sounded dated, but now somehow it doesn’t, paradoxically. To what do you attribute the resurgence of the popularity of analog?

Hmm, good question. Well, prior to the development of the Buchla and the Moog, no one had heard raw sounds. I mean, every sound that you’d heard prior to that had come out of some kind of instrument that was made from something organic: wood, metal, whatever. It was organic, and the sound was being shaped by moving through organic material, whether it was metal or wood or whatever.

Now, you had sounds that had no reference to anything organic. That is what made the waveforms that were created by these instruments unique and dynamic beyond explanation. Because of the way of which electronic sounds were used, from the ‘70s into today, they’re prosaic. There’s no shaping of them. Even Switched-on Bach: it’s really hard for me to hear that. Even though I love Bach, these sounds are so static, even though they’re analog waveforms.

But the minute that you begin to shape them with the high and low pass filters, then that becomes interesting. So, the rawness of the waveforms is the most unique thing about the early stuff. Still today, they hold their own. You’re absolutely right.

The Berkeley piece [“Berkeley Art Museum”]. That was one of the few times that we did a mic as well as line-in [recording]. So you’re hearing the house which made all the difference. It’s about an 11-minute piece. The university art museum was this huge concrete enclosure, and the sound in that space was spacey, to say the least. The nice thing about that is that you can hear the audience murmur, cough, cheer, squeak. It gives a lovely three-dimensional quality to the experience.

The meditation piece [“Meditation Moog 1968”], also; I think it’s the second piece. That one should be listened to in the dark on a really good sound system with a subwoofer. It’ll knock the plaque off your dendrites; it really takes you on a trip.

One of the thrills of playing that instrument was the ability to, sort of, massage your chakras on some level. All things manifest in waveforms. If you look at the waveform relationship of the energy centers of the body … I’m not going to go any further into that; otherwise I’ll start to sound like a sufi.