The Moog Model III didn’t come with a manual. How much was it hit-or-miss to develop the sounds that you wanted?

Well, I pretty much grasped immediately what a high/low pass filter was. Because, in my lecture demonstration, with the microphone and my mouth, I would do exactly the same thing that I would do with the Moog instrument: I would create overtones in my oral cavity, in the mouth. And I explained the envelope generators were like the teeth, open and closed, allowing sounds coming in and out.

Basically, I said, “You can do everything with your mouth that you can do with this instrument, but this does it better.” So, shaping the sounds was one of the things that, immediately, became marvelous. It was just extraordinary. I had never heard anything like that and, perhaps, no one else ever had at that moment too, which was further incentive to keep exploring, creating. 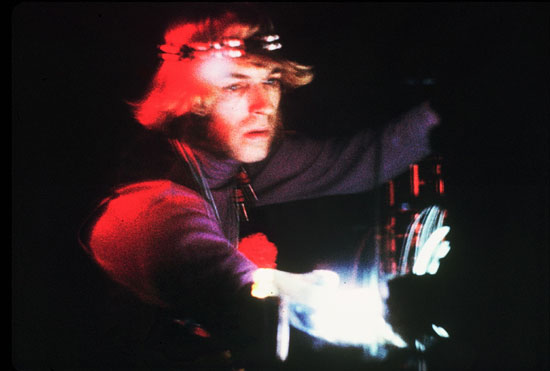 You weren’t a trained musician, though …

No. I never knew what I was going to do. Because I had been raised as a singer and had a very good ear, I never really learned to read music. So, I didn’t relate the Moog to any of the standard musical anything other than what I was listening to and what was happening at the moment. I would create something, a series of beats, then I would apply tones to them, and then I would play along with that.
Every time I played, I wanted to tell a story. At least, I considered that I was starting a story, and I had to finish it. So, I never let anything go until I was sure that it made sense musically.

When you played live, you were working from sequences that you had already patched together ahead of time, right?

No! I wanted to thrill myself, and I usually did. I mean, it was like, “What can I discover here that I can play along with?” And if it was a thrill for me, I was assuming that it was probably going to be a thrill for the audience as well. I was often wrong…

I was going to say! Those two things don’t always go hand-in-hand.

You were involved with the infamous 1969 concert at Altamont Motor Speedway. Tell me about that experience.

Well, that was pretty off the cuff as well. It came up quite suddenly. We were sitting around in the San Francisco Rad Lab on a Friday evening when we got a phone call from Bill Graham’s office: “Can you help come out and set up the stage and the sound system?” I said, “Yeah, we can do that, but I want to play.” And they went, “Um…okay.” You know, what are they going to say?

So, we put everything in the van and drove – in the middle of the night – out to this area and found a spot up on the hill behind the stage. We set up a little camp because we were going to spend the night. I set everything up so that, when I got up in the morning before the sun was up, I could play the sunrise. It just occurred to me that that would be something interesting to do, which I did. I played for about ten, fifteen, maybe, and then we went down and put the stage and sound system together, and put the instrument up on the stage.

The people began to arrive, and suddenly we were just surrounded; there was no place to go. There were tens of thousands of people. So, when it came my turn to play, I decided in some kind of foolishness that I was going to do that ramp wave from 55 cycles to 20,000 cycles and just thrill the crowd with a big siren sound that goes up into the stratosphere.

There was no clear-channel [communication between the stage and sound technicians] at that time. Owsley was on the board, and his board was up on the scaffolding in the middle of the crowd, about 50-60 feet from the stage. He was up there with a mixer and headsets and so forth. I guess he said, “Okay, okay it’s your turn; let’s go.”

So, I start with this low frequency, and I can only imagine what happened after that. I imagine that he’s standing there in front of his board, he doesn’t hear anything, and he sees the needles start to move. Then, the needles move into the red, and he still does not hear anything. Just as I’m about to get that low rumble into his speakers — and God knows what he’s on at this point — he freaks out and shuts me off. I never got to play! And that was that.

This is such a bizarre story, I mean, this was a fulcrum point. Had I started off with something normal, or sort of normal, it all would’ve been different. Had I been able to actually perform, my life would’ve changed forever, probably.