In the late 1960s, Doug McKechnie and his roommate launched the San Francisco Radical Lab, an experimental endeavor launched (in part, as you’ll read) to explore the capabilities of the then new and novel Moog Model III modular synthesizer. The Lab had one of the earliest of that instrument, with the serial number 004. Now in 2020, an album of McKechnie’s recordings from that era is being released as San Francisco Moog 1968-1972. As a companion to my interview feature (originally published in SF Weekly), here’s more Q&A from my conversation with Doug McKechnie. – bk 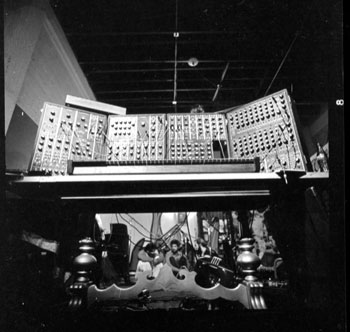 You used sequencers live even in the late ‘60s. At the time, did you have a sense that you were breaking any new ground?

No! Even after the instrument — after 4 years — was finally sold to Tangerine Dream, who made playing with sequencers famous, it still didn’t occur to me that I had done anything necessarily unique, even though I knew that I had the only instrument on the planet that wasn’t tied down in the studio. There were other smaller modules that people were using in various places, but we were performing constantly with the entire apparatus, going out to various places, including traveling to other states.

Was the Model III temperamental?

Oh, very. Yes, indeed. In fact, at one point, we had to have Moog build a 60-knob keyboard controller, and every time I played, I had to tune the 60 notes on the keyboard. If the temperature changed more than five degrees, the pitches began to drift; it was kind of fun to ride this magic tortoise. Here again, I didn’t think much about it other than, “Well, this is what I have to do.”

You gave university lectures on modular synthesis. What were those lectures like?

I would open all my lectures [by saying], “All things manifest in wave forms.” And then, I would take a square wave from 55 cycles to 20,000 cycles; I’d wow the crowd with that. There were lots of physical movements that you could do with sound, and we had two big Voice of the Theater speakers running through McIntosh amplifiers; the tube type. So we could shake the building with sound, if necessary. So, I began to explore! It was sort of mindless.

Back in 1958, a show called “Vortex” at the Morrison Planetarium that Jordan Belson and Henry Jacobs created; it was probably the precursor of light shows in the San Francisco Bay Area. It thrilled everybody, and it ran for several years at the Morrison, but that was my only experience with hearing electronic music, and I wasn’t particularly interested in it at the time. But [by 1968], here’s this extraordinary instrument, and so I began performing and lecturing with it, and Bob’s your uncle!

There was a documentary that came out several years ago called I Dream of Wires. In that, the early synthesizer development is painted to some degree as “East Coast/Moog” vs. “West Coast/Buchla.” Did you have any exposure to or experience with the Buchla synthesizers of that era?

I did, actually! Stephen Beck and Don Buchla … I knew Stephen pretty well, and he would use the Buchla a lot. On June 21st, 1969, I played a gig at the Family Dog on the Great Highway with Big Mama Thornton and Sandy Bull. Also, Rainbow Jam, the light show, was playing at that point, and this was the seminal evening for me because I got to meet and get to know the guys with Rainbow Jam; We later did a lot of things.

Anyway, there I was on stage, and I had indeed had several moments with Buchla instruments, and I didn’t think much of them. So, when Don came up to the stage and he said, “Hi, I’m Don Buchla,” we shook hands. I looked at him and, to my eternal regret, I looked him in the eye, and I said, “Don, when are you going to make a musical instrument?”

Well, of course, he never spoke to me again! Oh, Jesus, my smart mouth has probably gotten me into more trouble than anything. I knew it was wrong the minute it came out my mouth. I watched his face as his mouth dropped open.

But I went on to have an interesting evening at the Family Dog.