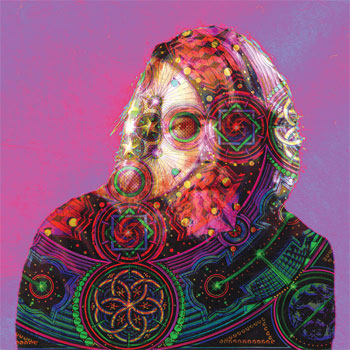 In the late ’60s, the Moog modular synthesizer was still very much an experimental tool. While there had been some ambitious attempts to use the Moog as the centerpiece of recordings — Mort Garson’s 1967 LP The Zodiac: Cosmic Sounds was likely the first album to feature the synthesizer prominently — “serious” use of the new instrument is often thought to have begun when Wendy (then Walter) Carlos released her groundbreaking Switched-on Bach in October of 1968.

However, in that same year, a San Francisco-based experimental musician named Doug McKechnie began tracking his exploratory tunes on the then-brand-new machine. As part of the San Francisco Radical Laboratory, McKechnie was an early innovator on the device, created by Robert Moog and first released in 1964.

A selection of McKechnie’s recordings from that era have been compiled as San Francisco Moog: 1968-1972. Out Oct. 23 on VG+ Records, this collection from nearly half a century ago makes for one of the most fascinating listens of 2020.

And — again, unlike his contemporaries — rather than approaching the novel instrument through an academic lens, McKechnie came to the Moog the same way many self-taught knob-twiddlers now approach modular synthesis: in a cheap apartment and with financial assistance from a generous parent.

In 1968, McKechnie was recently out of both the army and a marriage, and into a $250-a-month space, the entire third floor of a building on Harrison Street. He shared the cost of the 2,500-square-foot rental with Bruce Hatch, recently relocated from Kansas.

Hatch came from money. “His father owned a water heater company,” McKechnie recalls. “He wasn’t particularly musical, but he was a very sharp electronics guy.” Having seen a Moog Model III in an issue of Mechanics Illustrated on his flight from Kansas, Hatch decided he wanted one, so he rang his father and asked for one.

“Eight thousand dollars later,” says McKechnie with a laugh, “these boxes started showing up on our floor.” They had taken delivery of a Moog with the serial number 004.

McKechnie readily admits he had no real background in music. “I was a singer, but I didn’t play a keyboard or any other kind of instrument,” he says. But with Hatch’s guidance from an electronics perspective, he applied his innate musical aptitude to taming the unwieldy yet powerful beast. “[Hatch] showed me that [the Moog] could encompass the entire waveform circumstance of sound,” McKechnie says. “And you could pretty much do all kinds of things with it.”

Six months later, McKechnie was lecturing on the subject at universities; today he laughs at the memory. “I had no real understanding of electronic music, no understanding of the history of it,” he admits. But he was a fast learner. Not only did he figure out how to configure the massive bank of cables and sockets in a way that created expressive, otherworldly sounds, but he worked with a component that allowed primitive programming of the instrument.

McKechnie says that when the folks at Baltimore-based VG+ Records contacted him about releasing some of his early recorded pieces, they told him, “It turns out that you’re probably one of the first guys to do live performances with sequencers.” He was surprised. “I had never given it a second thought; the only way I could make anything musical with this instrument was to create little riffs with the sequencers, then play along with them.” The idea that he was doing something unprecedented never occurred to him.

The so-called Rad Lab was an attempt to explore the possibilities of the Moog, but its existence owed more to another motivation: women.

“The same reason why guys play guitar,” McKechnie admits. “We put an ad in the paper saying, ‘We need an assistant who believes in magic.’ The next two months, we had three, four, five women a day show up and apply for the job!”

But some work did get done; quite a bit, in fact. “Pretty much every time I performed, we recorded,” McKechnie says. “We used an Ampex machine in the studio and a Nagra while we were on the road.”

What might have been his most high-profile performance on the Moog wasn’t documented, because the festival’s live sound engineers were confused by what McKechnie was doing. With the Moog, he began by generating a very loud — but below the human threshold of hearing — tone. When the sound man saw the VU meters go into the red, he panicked, pulling the volume faders down to zero. So even as McKechnie continued playing, nobody heard anything.

That ill-fated performance at the 1969 Altamont Speedway Free Festival — yes, that one — might have set his career on a different trajectory, but even so, McKechnie successfully captured many other live and in-the-Lab improvisations. San Francisco Moog: 1968-1972 draws from that cache of recordings.

McKechnie admits that the combination of the instrument’s unpredictability and his own improvisational approach meant that not every performance deserved enshrinement. “Every piece I created was an exploration; nothing was planned. There was a lot of dross, as one can imagine, getting to a point where you had something that was worth keeping,” he says. “But I tried to record everything we did, knowing that a certain percentage of it would be valuable or usable to stand on its own.”

Because the Moog’s output was often run directly into the recording devices, McKechnie’s Moog improvisations were captured in high quality audio, largely free from external sonic clutter. And even though the synthesizer was monophonic — allowing only one note at a time to be played — in post-production, he fattened up the sound. “I basically created an echo by recording one track onto a second track with a slight delay,” he explains, “which gave a three-dimensional feeling to the music.”

In the early 2000s, sensing their historical importance, McKechnie decided to further preserve the tapes for posterity. With the help of David Gans (of KPFA’s “Dead to the World”), he transferred the tapes to digital format. No other changes were made. “The raw sound of the synthesizer is so sharp,” he says. “The presence of the waveform is pretty profound.”Part of one of McKechnie’s Moog pieces was used in the soundtrack the Academy Award-nominated 1977 documentary film Spaceborne. But for other than the lucky concertgoers who attended his early performances, everything else on the new LP will be new. And a half century after the recordings were made, most everything on San Francisco Moog: 1968-1972 still sounds out of this world.

Special thanks to Nick Veronin.