This summer I spoke with Dan Wilson and Jacob Slichter of Semisonic about the band and its new EP, You’re Not Alone. (Vacationing with his family at that time, bassist John Munson was unavailable, so I missed the opportunity to follow up with him on our 2015 conversation.) Large bits of our conversations are featured in the feature I wrote for Goldmine Magazine, but a great deal of interest simply didn’t fit into that story. With that in mind, I present an edited transcript of the remaining parts of those interviews. Today it’s the first part of my chat with guitarist and songwriter Dan Wilson; check back soon for highlights from my conversation with drummer/keyboardist Jacob Slichter. – bk

Why an EP and not a full album?

A couple of reasons. In a way, it sort of works out just fine. I had written quite a few songs. It was almost like, “These rock the most, they’re by far the best, and it happens that there’s five of them.” I think the tradition of an album is fabulous and I love it, but I don’t love the part where the last five tracks are not cool. EPs are just a good way to go, and [we thought], “Why don’t we do this now, and then we’ll do another one a year later, and we’ll see what life offers us.”

Is there going to be a physical release of You’re Not Alone?

Yeah. We’ve got a very nice vinyl mastering of it that sounds great to me, and I think there will be CDs as well. It’s nice to think of the vinyl because we have this beautiful painting by Thomas Sanchez on the EP. I love the idea of large vinyl version of it because then people can see the details of this fantastic artist. 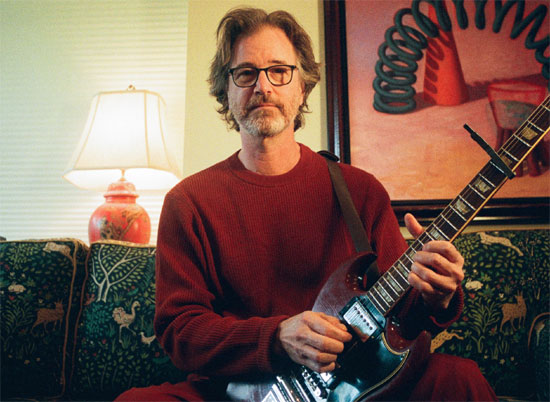 In what ways do you think the Semisonic of 2020 is different from the one of two decades ago?

First of all, musically speaking, and collaboratively, it’s not like I’ve been under a rock for 20 years. I’ve been collaborating with brilliant artists of all styles and ages continuously for a long time. And I’ve had plenty of opportunities to work on music, whether it’s experimental or very modern pop, or very vintage-sounding music.

[But] when we get together, we make the sound that we make. We start playing our instruments and we’re just going to sound like us. That’s a unique sound, and as much as anything people want to hear just your unique take on things, your unique point of view, your unique DNA being expressed really fully. So the more I thought about it, I thought, “Okay, we don’t need to update anything.”

I love that comment. Because last year when we helped out with the re-release of Feeling Strangely Fine, we got a new mastering back. and were raving. And it even struck me really hard then, how Bob Clearmountain’s mix didn’t sound dated either. There was something about the balance of it that was very arty.

You know, there are times where there was a lot of either ornamentation or depth of the arrangements or different things happening, but it didn’t sonically sound gimmicky at all. And I was really struck by Bob’s mixes and the band’s performances and Nick’s [Launay’s] production, everything. There’s nothing that made me cringe! I know I’m the closest person to it; I know I’m the least objective listener, but I got good ears on it. I know I would listen back and if I had heard one of those gated reverbs, I would have been cringing, maybe even thinking, “Let’s remix it.” But I never thought that one time. I was like, “These mixes are fucking great!”

Someone at the label sent me the 2LP reissue of Feeling Strangely Fine when it came out a little over a year ago; it’s great.

We had never put it on vinyl before. And it sounds so good on vinyl. I once was talking with Rick Rubin about CDs versus vinyl, and how he felt if he would A/B some Red Hot Chili Peppers vinyl version with a CD. He said he’d never even do it, because it would have just made him cry.

It’s hard to imagine Rick Rubin crying, but there you go.

Well if there’s one thing that could make that happen, I guess it tells how much worse the CD sounded than the vinyl.

There’s a definite upbeat, positive, optimistic vibe to the songs on this new EP. And that’s a thread that runs through a lot of Semisonic music. Of course, the timing is great, because we could all use some optimistic stuff now. The songs were written two years ago, and then recorded last year. Have you been able to maintain that kind of positivity yourself into right now?

It’s certainly challenging. I have maintained an acceptable level of positivity, I guess I’d say. And I still feel like my creative engine is going, and like everyone else, I’m trying to improvise a new life for myself.

One of the challenges for me is that a lot of my artistic practice is designed to help me not be reckless, because I love people and I love interaction. And that takes effort for me, because I also could just disappear and do my own thing without coming up for air for months or years.

The current moment might seem like the comfort zone of a reclusive person. But actually, I’m self-programmed to be more extroverted because my tendencies to being reclusive are just too intense. If my comfort zone was writing songs, being solitary and not seeing the rest of the world, I’m sure I’d be just happy as a clam. But I miss people. I miss jamming. And a lot of the things that are off the menu for now are the things that I cherish the most.