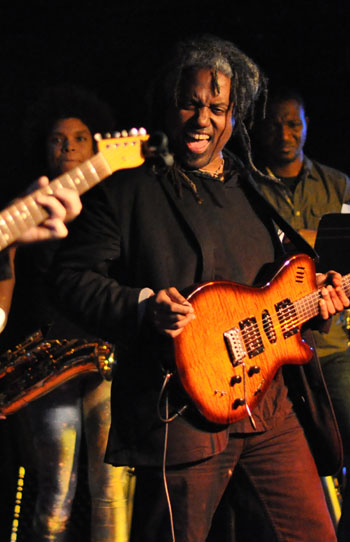 Among the musicians interviewed for this story, André Cholmondeley has seen perhaps the most significant change since the pandemic began. While he’s active on the local music scene (playing guitar in Wham Bam Bowie Band and as a solo avant garde/experimental synthesist), he also leads Project Object, an internationally touring group that pays musical tribute to Frank Zappa. In normal times, Cholmondeley is only occasionally at home in Asheville; he’s more often found hopping around the globe, working as tour manager or instrument technician for an A-list roster of clients that has included Emerson, Lake & Palmer, Derek Trucks, Al Di Meola, Ten Years After, and Yes.

“Live music is my entire livelihood,” Cholmondeley says. He says that his activities include “working on tours for three or four major artists per year, doing two or three small tours of my own, doing press releases, and booking and managing other artists from my home office.” Characterizing his income as “modest,” he proudly emphasizes that all of his income-generating endeavors are music-related.

Cholmondeley estimates that the pandemic has caused him to lose more than $50,000 in revenue. “The grand universal irony is that [2020] was going to be my busiest spring/summer in years,” he says. His bookings—all since canceled—included a stadium tour with Poison, Mötley Crüe, Joan Jett, and Def Leppard.

Since the shutdown, Cholmondeley has turned to web-based performances, offering instruction and workshops, including a primer on analog synthesis, and conducting interviews with other artists. “That all has generated a bit of cash and is lots of fun,” he says, “and builds an audience for a possible future in physical touring. I’m always happy in life to make lemonade from lemons.” He feels certain that web and technology will “play a more central role [in music performance] moving forward.” Cholmondeley is also keeping an eye on the efforts of the National Independent Venue Association (NIVA).

The Business of Music Searches for a Way Forward in the Region
Founded in March 2020, NIVA’s stated mission is “to preserve and nurture the ecosystem of independent live music venues and promoters throughout the United States.” The organization has more than 2,000 members across the country, and in Western North Carolina, nearly 20 venues have joined NIVA’s efforts. “We strongly support and have been actively working with NIVA in order to ensure a path forward for our independent venue and festival industry,” says Liz Whalen of the Orange Peel.

The famed Orange Peel has canceled nearly all scheduled shows. “Indoor shows are not particularly safe,” Whalen says, “and it’s our belief that they won’t be, until there is a vaccine or effective therapy.” The venue has lost approximately 95% of its revenue due to the shutdown, she reports.

In hope of bridging at least some of the shortfall, the venue’s management has applied for and received a grant from the Buncombe County Tourism Development Authority as well as a PPP (Paycheck Protection Program) loan. They’ve also applied for a loan from the Small Business Administration, “but we have not received it, and we have no real way to communicate with them [to determine] if it will be forthcoming,” Whalen says. “We are not counting on it.”

In the meantime, the Orange Peel has scheduled livestreaming shows in cooperation with local music platform IamAvl (Independent Arts + Music Asheville). While the club isn’t open to audiences, its interior has been reconfigured to accommodate livestreaming. “The stage set stays the same, and we have social distancing and no-contact load-in protocols in place to bring a rotating cast of local bands regularly,” Whalen says. She notes, however, that the financial return on livestreaming is negligible.

The Orange Peel has looked into the feasibility of large-scale, outdoor venues to host drive-in concerts, “but the logistics and production are quite expensive,” Whalen says. Instead, partnering with Asheville Brewing, the Orange Peel is opening an outdoor space on Coxe Avenue in Downtown Asheville. Whalen says that the new venue, Rabbit Rabbit, “can potentially host small, socially-distanced outdoor shows.” Beyond that, Whalen is hopeful that NIVA’s lobbying and advocacy efforts will secure some help for music venues. “We are not booking touring shows for 2020 or even early 2021 at this point,” she says. “It’s just not realistic. We are hopeful that by next summer, it will be possible to do larger outdoor concerts again.”

The Grey Eagle in Asheville’s River Arts District is a NIVA member as well. Originally located in Black Mountain, the storied venue has been a prominent and foundational fixture in the region’s music scene for more than 26 years. Owner Russ Keith says that the Grey Eagle scheduled more than 30 shows a month before the pandemic, and while music venues typically run very tight profit margins, he says that the venue was “on track to grow the business from 2019 before the pandemic hit.” Like most other local music rooms in the region, the Grey Eagle has experienced a 95% decrease in revenue.

But the music hasn’t completely stopped. A number of popular local and regional music artists—including Eleanor Underhill and Friends, the Get Right Band, Free Planet Radio, and Steep Canyon Rangers’ Graham Sharp—have livestreamed shows from the venue. And beginning mid-summer, the Grey Eagle began scheduling concerts on its outdoor patio.

Russ Keith is realistic about the benefits of the patio shows. “There’s very little [financial] return on these kinds of events, but they’re helping to raise spirits and keep the Grey Eagle on the map,” he says. “Overall, it’s worth it if we can provide live music experiences to the community in a safe and manageable way.”