Facing the Music, Part One

Music-making is inextricably entwined with the culture of Western North Carolina. In fact, the path of live performance of music in all its myriad forms provides a handy set of guideposts to chart the history of the region. And in recent years, Asheville has earned a prominent spot as a center of creative musical activity.

But the novel coronavirus has thrown a wrench in the day-to-day activities of most everyone, especially those in the arts community. Even beyond its threat to health and safety, the pandemic’s effects are felt strongly by the music community in WNC, many of whom draw their livelihood from live performance. Still, in the face of adversity, it’s hard to crush the spirit of these creatives. In his or her own way, each is cautiously navigating a way through and beyond this crisis.

WNC’s Live Music Tradition
Western North Carolina has long been a nexus of live music. Unusual for a city of its modest size, Asheville in particular has established itself as a hive of activity for music of both the homegrown and touring variety. As early as 1928, Asheville hosted the Mountain Dance and Folk Festival, an annual celebration of the region’s music and culture that continues to this day. In 1967, Shindig on the Green was founded as a weekly summer event that gives mountain music players of all skill levels an opportunity to play together in an informal setting, a tradition that continues now.

While celebrated today as one of the finest music venues in the country (Rolling Stone named it among the top five rock clubs in 2008), even in the ‘60s the Orange Peel was a magnet for top-line touring acts in the soul and rhythm and blues idioms. Prior to the neighborhood being razed in a fit of urban renewal, Asheville’s East End featured a number of small live music venues popular within the city’s African American community. South of the city, The Royal Pines was a popular dance hall for many years.

Even in the 1980s—a period when its downtown was characterized by vacant, boarded-up buildings—Asheville could claim a significant live music scene. Though it’s long gone now, a tiny club called 45 Cherry served as the earliest home to an annual event hosted by local musicians, a marathon concert that would come to be known as Warren Haynes’ Christmas Jam. Downtown, Be Here Now featured well-known touring acts in many musical genres and provided an opportunity for local acts to open for those artists. And well into the 21st century when Lexington Avenue was still populated by drug dealers and prostitutes, the much-loved Vincent’s Ear hosted edgy rock and punk acts.

There was a lively coffeehouse music scene, too, highlighted by Beanstreets downtown; that tradition continued into the 21st century with the long-running Mountain Spirit Coffee House concert series at the Unitarian Universalist congregation in North Asheville. Today it continues in West Asheville at Isis Music Hall.

While those unfamiliar with Asheville’s musical character might assume from its location that the city is primarily focused upon Appalachian and bluegrass traditions, the city has—and long has had—a flourishing and eclectic musical scene. Local live music showcases everything from jazz (including prewar “hot” jazz, gypsy jazz, bop, big band, fusion, and avant garde), to electronic/experimental (helped along by the presence of local synthesizer manufacturers Moog and Make Noise), to hip hop, industrial, metal, punk, blues, country, singer/songwriter, and most every other style imaginable.

Its status as a kind of laid-back creative hub has drawn all manner of artistic types to Asheville and the surrounding region, and the community that has grown up around that scene has been largely supportive of musical endeavors. Though it ended in 2013, at its peak the Bele Chere Festival—the largest free festival in the American Southeast—shone a bright light upon local music artists who performed alongside major, nationally recognized acts. Moogfest—named to honor pioneering inventor Robert A. Moog—leaned more toward electronic and experimental sounds, and in its years in Asheville (2010-2014), the multi-day festival brought worldwide attention to the city. 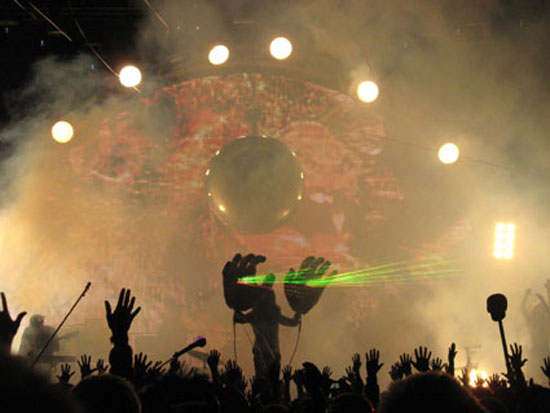 The Flaming Lips onstage at Moogfest 2011

Western North Carolina looks beyond its borders musically, too. Folkmoot, a celebration of music and dance around the world, began in Waynesville in 1984 and continues to this day. Launched in 1995, the Lake Eden Arts Festival (affectionately known as The LEAF) is a twice-yearly event that celebrates music and culture from around the world, featuring local and international artists. Acclaimed percussionist and Asheville resident River Guerguerian hosts the Asheville Percussion Festival, a like-minded annual event showcasing drumming traditions from around the world.

A thriving jam/collaborative scene has grown up around a number of musicians with initiative and organizational skills; many musical genres—jazz, blues, electronic and countless others—are represented through regular jams. And Asheville’s famed drum circle in Pritchard Park provides an opportunity for anyone with a percussive instrument to join in.

Live Music by the Numbers
Beyond its cultural and entertainment impact, all of that live music in Western North Carolina does translate into a significant economic force. According to figures provided by Heidi Reiber of Riverbird Research, a division of the Asheville Area Chamber of Commerce, music represents a significant portion of the job market in the region. Nationally, music-related jobs grew about 23% between 2014 and 2019. North Carolina experienced even better numbers: a 33% increase in that same period as the 23-county WNC region was home to a musical job explosion. For the period of 2014 to 2019, jobs in music-related occupations in the region rose from 1048 to 1508; that’s an increase of 44%.

A 2017 study by the Asheville-Buncombe County Economic Development Coalition (also authored in part by Reiber) underscores the point that the music industry has contributed to the region’s economy. According to that study, in 2016 music was responsible for $96 million of labor income, as well as $33 million in federal and state taxes. The study also noted that on a typical Saturday night in the Asheville area, there were approximately 60 live music performances.