The Appeal of Fresh ‘Fwuit’

But in 2019 Holy Ghost Tent Revival shifted musical gears, adopted a more soul-focused sound, and changed its name to Moves. And now – just over a year later – what Ellenberger describes as the “core” of the band is re-branding again, this time calling itself Fwuit.

If that all seems a bit confusing, Ellenberger insists that the motivation behind it all is straightforward. “This trio – Kevin, Ross and myself – just kept playing a bunch of shows that were [only] suitable for a trio,” she explains. “And the three of us were able to dedicate full-time to touring.” 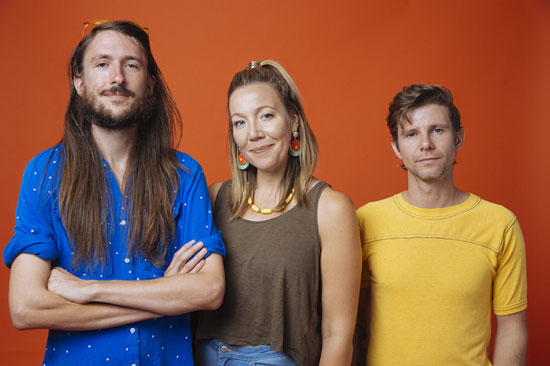 Of course, thanks to the pandemic, there’s no touring going on at present. But Fwuit has put together a self-titled, digital-only EP of its original music. With a streamlined sound that follows on from what Moves did last year on its soul- and r&b-influenced self-titled album, Fwuit is sophisticated soul pop.

The EP’s “Sparkling Water” has a sleek, urbane vibe, with Ellenberger’s sterling, assured lead vocal ably supported by subtle instrumental backing. Featuring lead vocals from Williams, “Chrome Canyon” splits the difference between singer-songwriter and country soul styles. The radio-ready “Only Got One” is reminiscent of Lake Street Dive. And all the music on Fwuit’s eight-song release is paired with a positivist lyrical perspective. “Our guiding inspiration is to create content that we find meaningful,” Ellenberger says. “Hopefully it’s a reflection of what’s happening in the world around us, and helps people feel more connected and able to process how they’re feeling about it.”

Though the EP soft-pedals it – favoring instead a more serious, thoughtful ambiance – a lighthearted attitude is at the center of the trio’s approach. Fwuit got its start as the musical component of LaZoom’s “Band and Beer” bus tour of Asheville. “We like to call ourselves ‘Fwuit of LaZoom,’” Ellenberger says with a laugh. “What we found in that environment was a fun balance of improvisation between the host of the tour and the band.”

The group continues to tinker with the details: when it began, the group had an exclamation point as part of its name. And while the EP is digital-only, videos for all the songs are in the works, and a physical release of Fwuit remains a future possibility. And the trio plans to launch a Patreon (fan subscription/membership program) page soon.

And while the compact Fwuit lineup is poised to return to active live-concert duty as soon as it’s safe and practical to do so, the group formerly known as Moves still exists as well. “We will always have the bigger band for bigger events,” Ellenberger says. “We like the idea of being able to expand and contract.”