The Moon and You Aims Higher with ‘Asteroids’

The Moon and You began work on its newest album almost exactly four years ago. And initially, work on the album proceeded really quickly. “We got the rhythm tracking done in two days,” recalls cellist/vocalist Melissa Hyman. “The day before and the days after the 2016 [presidential] election,” adds Ryan Furstenburg, guitarist/vocalist and Melissa’s husband.

But then a succession of other activities took precedence, and work stopped. The Moon and You had a busy schedule of live dates locally, regionally, around the nation and overseas. So even though drums, bass and rhythm guitar parts were complete, the album remained unfinished. “And it just remained in that state for awhile,” says Hyman. “It was definitely a combination of our travel schedule and trying to [find] the funds to have more sessions.” 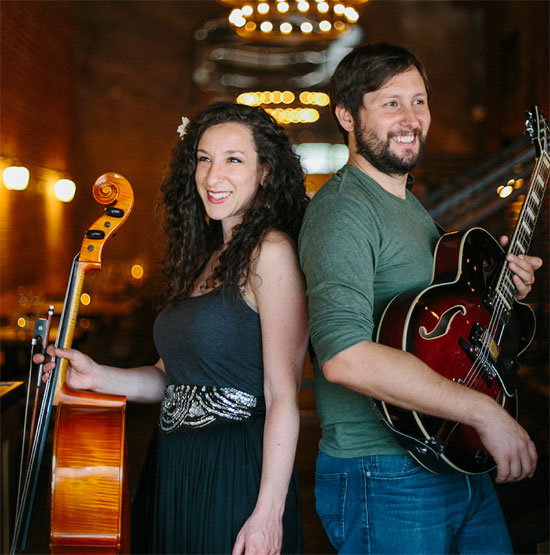 But it’s not as if The Moon and You weren’t recording. The duo released the full-length Endless Maria (“recorded in ten consecutive days,” Hyman says) in 2017. And then – with a collection of musical pals – they recorded and released 2019’s Big Mystery, an album of children’s lullabies credited to The Moon and You and Friends. So the uncompleted Asteroids project was again set aside. “We got a commission to do Big Mystery right in the middle of the process,” Furstenburg says. “It’s been so long,” Hyman adds with a laugh, “that honestly I’m struggling to remember what some of the holdups were!”

“Asteroids was still hanging out there, unfinished,” Furstenburg says. “But we always planned on [finishing and] releasing it,” adds Hyman, completing her husband’s sentence. Eventually they did finish, and the resulting work is a concept album.

Stylewise, Asteroids could serve as a sampler of the many musical moods of The Moon and You. The title track’s outro sounds like a Pet Sounds outtake; “County Lines” has the feel of classic-era AM radio country. “Rat King” sounds like prewar hot jazz. Hyman says that variety isn’t exactly intentional. “We tend to write in a fairly eclectic way,” she says. “We create the instrumentation and arrangement of each track to serve the song. And that’s more important to us than making an album that sounds similar from track to track.”

Yet Asteroids hangs together as a whole. That’s in keeping with the idea of connectedness, a theme that runs through all of the songs. And – intentionally or not – that makes the long-delayed appearance of the album now, during a pandemic, especially timely. “Releasing it is a way to connect with people in a way that’s been lacking,” Furstenburg says. “It does have a quality of being almost like a photo album,” Hyman suggests. “Friends that we met, and adventures that we recall fondly … that I wish we could be doing right now.”