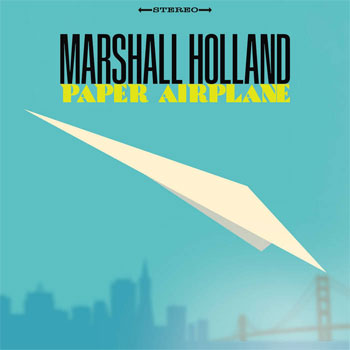 It’s a bit unnerving to realize that it has been six and a half years since I first heard Marshall Holland and the Etceteras. As I noted at the time, that album – despite its misleading title – is the work of one man. And it’s a very good one, brilliantly displaying the finest pure pop influences in the context of original material.

If Holland has made another album since then, it has slipped by me. Regardless, I welcomed receipt of Paper Airplane, his latest release. Dispensing with the group trope, the new disc is another true solo work. Ten of the eleven songs are Holland originals, and the other cut is one written by co-producer Michael R. Brooks.

On Paper Airplane, Holland employs a slightly – but only slightly — harder edge; the opening track “Our Fate” channels the twin influences of another Marshall (Crenshaw) and (very) early Elvis Costello; it has the impeccable melodic sense of the former coupled to that nervy energy of the latter. And the synth solo is nice touch. For “The Rain Comes,” Holland is back on more familiar territory; it bears the mark of someone who has consumed his share of shimmering sunshine pop like Spanky and our Gang, Cowsills or (to pick a contemporary and related act) fellow Bay Area pop purveyors The Corner Laughers.

Deft, subtle use of Mellotron (or samples thereof) adorns that track; Holland understands the way to use keyboard in a pop/rock context without allowing them to overwhelm.

The sweet and simple “A Hand Holds a Bird” strikes the bullseye, right between melancholy and romantic. “Waiting for That Peace & Love” is a minor pop masterpiece worthy of the Left Banke (with more Mellotron). The tack piano that anchors the bouncy “Don’t Do It” is a treat. And then Holland rocks out – in a manner only hinted at on “Our Fate” – with “She Buys a Dress (to Match with Her Pink Belt).” Buzzing combo organ and a brief reggae breakdown will transport the listener back to ‘79. One gets the sense that if Holland wanted to craft an entire album of this kind of tune, he could. But then we already have This Year’s Model, don’t we?

“I’m Checkin’ Out” is closer to AM pop of the early ‘70s, in the best way. With its thundering tympani and lovely acoustic strumming, it’s a bit reminiscent of Explorers Club (or at least parts of that band’s aesthetic). The tune’s subtle Leslie effect on the guitar is a delight as is its use of (yet more) Mellotron. And the dual lead guitar nails the mid-’70s vibe.

“Look Into My Eyes” builds on the soft-pop foundation of “A Hand Holds a Bird,” with gentle, tinkling harpsichord textures and a soft-as-a-whisper lead vocal. “Whatcha Gonna Do” allows Holland to showcase his instrumental dexterity: the drums, guitars and bass are all superb, in service of a solid tune.

Paper Airplane comes in for a soft landing with “A Dream Away,” the kind of song that reminds cratediggers of Brian Wilson’s productions for others. It has all of the qualities – well, except the rocking-out part – that make Marshall Holland special. Paper Airplane is hereby shortlisted for my best of 2020 list.