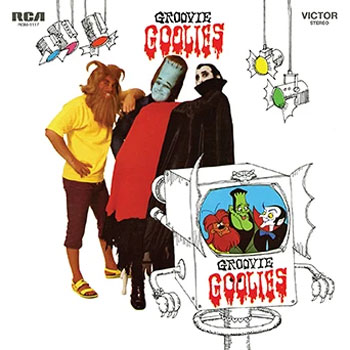 A little over a year ago I was tapped to write liner notes for the first-ever reissue (on CD and vinyl) of The Munsters, a cash-in album that’s actually pretty good. That gig eventually led to me getting another assignment with a similar theme: the liner notes for Groovie Goolies.

As readers of a certain age may recall, Groovie Goolies was a Saturday morning animated series (we called ‘em cartoons) that sought to latch on to not one but two crazes: renewed interest in “classic-era monster characters and the bubblegum music of The Archies. So Groovie Goolies featured plots – thin as they might be, since this was aimed at kids after all – built around songs. The characters would perform the tunes during a musical interlude. Silly, relatively inconsequential stuff to be sure, but the music was solid (so to speak) bubblegum pop very much in line with the pop of its era.

There’s a bit of a story behind the creation of the music, and all of the personalities involved found success outside of Groovie Goolies. But rather than spoil all that, I’ll simply suggest – recommend, even – that you pick up a copy of Real Gone Music’s new Groovie Goolies reissue, and read my liner notes therein.

By the way: If you’re in a Holiday mood, you might also enjoy reading about the Halloween Nuggets boxed set and/or the all-star Mondo Zombie Boogaloo album featuring Los Straitjackets, Southern Culture on the Skids and The Fleshtones. Or hey: a reissue of some Zacherle stuff!