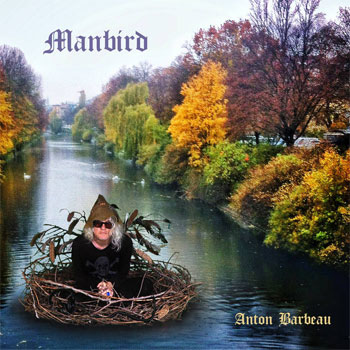 If Todd Rundgren were a bit younger and a dash more underground/indie-inclined, he might resemble Anton Barbeau. Among other similarities, Ant shares with Todd a predilection for going his own way – bouncing effortlessly between styles, resolutely defying easy pigeonholing – and for making music that is at once accessible and requiring of active participation on the part of listeners. What I mean with that last bit is that Barbeau crafts catchy melodies that draw the listener in, but that once inside those songs, the (to purloin a too-seldom used word from Mr. Fripp) audient still has plenty to absorb, to chew on.

And that’s all as true as ever in the case of Manbird, Anton Barbeau’s latest release. A sprawling double-album affair, at 25 tracks there’s a temptation to suggest that it’s Ant’s White Album. And like The Beatles’ ‘68 release, Manbird is an eclectic assortment of songs that showcases the breadth and depth of Barbeau’s immense talent.

But here’s a curve ball: there’s something about Manbird that makes it ever-so-slightly less quirky than Ant’s previous work of late. As ever, one can play spot-the-influence, but that exercise will only get one so far. Tunes like “Across the Drama Pond” draw as much from new wave as they do from (the less obvious influence of) krautrock as well as late-baroque rock exemplars like XTC. But hey: forget all that and just enjoy the song.

That said, for fans of the artist’s more idiosyncratic endeavors, Manbird does not disappoint. “Savage Beak,” for example, ranks right up there on the quirk scale. Yet there’s a distinct flow that unites the songs, molding then into a satisfying, gently challenging whole.

A great deal of Manbird features Barbeau – who splits his time these days between Sacramento and Kruezberg, Berlin – handling everything. Or “all and otherwise,” a phrase he employs in the album’s mini-poster lyric/credit/photocollage sheet, another White Album writ-small touch.

When Barbeau does enlist musical assistance on Manbird, he chooses from among some supremely talented associates, nearly all (if not all) of whom have appeared on his past projects. That list includes vocalist Allyson Seconds, drummer Michael Urbano, Morris Windsor, The Corner Laughers’ Karla Kane and Khoi Huynh, Larry Tagg and more. And for gearboffin fans like myself, he helpfully notes the gear he uses: Roland TR-707, Sequential synthesizers, the mighty Mellotron and so on. But there are plenty of “real” instruments as well: guitars, drums, trumpets and (again, as Ant might say) allsorts.

Anton Barbeau is prolific; there’s a lot of music out there for the Ant-inclined. And – again drawing the handy and useful Rundgren comparison – while large catalogs can be rewarding for the serious fan, they also have the potential to overwhelm, to intimidate, to leave the novitiate (Ant-curious?) wondering, “Where to begin?” I’m happy to be able to recommend Manbird as a user-friendly entry point into the musical world of Anton Barbeau. Stuffed (but, please note, not overstuffed) with musical riches, it easily ranks among his best and most representative works.